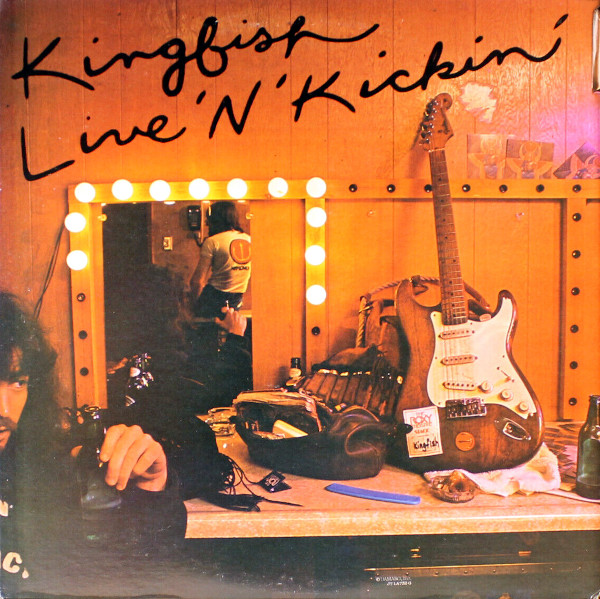 Just a live album before Weir left the band for (the) Dead.

The first Kingfish album for Jet Records makes a point of telling you that Bob Weir was just passin’ through, lest you pin your hopes on a long-term relationship between the Dead guitarist and this band of riders. While Live ‘N’ Kickin’ allows them to extend the relationship for a second album, it doesn’t bode well for a second album of new material. The non-cover songs here are either pulled from their debut album, Kingfish, or from their earlier incarnation as Horses. That unpleasantness out of the way, the band’s first live album is better than I expected, suggesting that (like the Dead) Kingfish was more electrified on stage than in the studio.

The recording quality is fair enough but slightly flawed, with Weir’s rhythm guitar too high in the mix. The vocal performances are good if occasionally muffled, the lead guitar merely okay most of the time. This would be the end of the road for Robbie Hoddinott and drummer Chris Herold, who were replaced before the band’s next album, Trident, was recorded. Honestly, if you make it that far in Kingfish’s discography, good on ya.

Highlights from this set include the opening Good-Bye Yer Honor (a near match for those magical Hunter-Garcia compositions), the two Horses tracks (Jump for Joy, Overnight Bag) and Bob Weir’s version of Mule Skinner Blues, which surprisingly never crept into the Dead’s setlist. Chuck Berry’s Around and Around, of course, will be very familiar to Dead fans. Kingfish also aren’t the first band to cover I Hear You Knockin’, but you can’t go wrong with those two tracks. Junior Walker’s Shake and Fingerpop and Rufus Thomas’ Jump Back round out the set with an infusion of R&B/soul.

If you enjoyed the first Kingfish album (I did), you’ll enjoy hearing them play half of it live mixed in with some additional material from the outside. It’s a laid-back set that I would have paid to see, and a good time was presumably had by all. Unfortunately, Kingfish didn’t catch a lot of breaks outside of landing Bob Weir for a year during the Dead’s hiatus, but at least they left behind a couple of good albums.