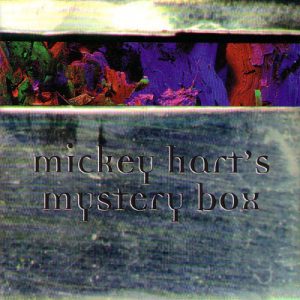 True to its name, Mickey Hart’s Mystery Box turned out to be a wonderful surprise. Combining the lush vocal harmonies of Mint Juleps (a sextet of female singers), plenty of percussionists, fleshing out the music with melodic instruments, and adding the lyrical insight of Robert Hunter, what emerges is an amazing animal that sounds more like a king of the contemporary pop jungle than an artifact from the Dead’s drummer. I’m still trying to get my arms around a suitable reference point: imagine music informed by The Beach Boys, Bob Dylan, Tom Tom Club and The Tubes, played by musicians who went ahead and did their own thing anyway. The result is unique and yet reassuringly familiar, far more commercially savvy than most of Mickey Hart’s music. As much as the Hart/Hunter connection will attract Deadheads, Mystery Box isn’t anything like the music of The Dead on the surface. And yet the music is nothing if not a celebration of creative chemistry among its members, something that formed the foundation of The Dead’s appeal. I’ve had a similar reaction to the later work of The Tubes (Genius of America) and Todd Rundgren, marveling at their ability to toss off one polished gem after another while lamenting the limited audience that stuck around to hear it. The range of music on Mystery Box is astounding, the tiny treasures tucked therein manifold. I usually start by slinking along to the irrepressible dance of “Where Love Goes (Sito),” get swept away in the swift currents of “Full Steam Ahead,” drift in the sweet sentiments of “Down The Road” (with a fairy tale ending for Jerry Garcia to whom the disc is co-dedicated), shake my humble booty to “Sandman” et cetera until I’m convinced that this group can do no wrong. Even if you have a preconceived idea of the sort of music you like, Mickey Hart’s Mystery Box will surprise you with its universal appeal. If I can convince you to buy one extracurricular Dead album, make it this one. It is, so far, the most pleasant surprise I’ve had all year (though, it being only February, I hope not the last pleasant surprise). In fact, if this didn’t make at least a few best-of lists for 1996, someone was asleep at the wheel.