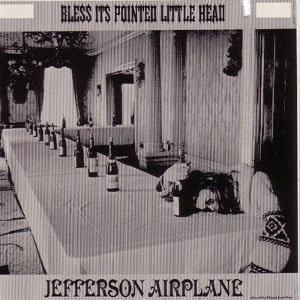 A psychedelic mass for the senses, this is what you wished the Airplane sounded like on stage every night. It’s all about the chemistry: the chemistry between Jorma Kaukonen and Jack Casady (shades of the Dead’s inspired intermingling), the chemistry missing between Grace Slick and Marty Balin as they each carve out a piece of the spotlight and the chemistry flowing through everyone’s veins. Opening with the black-and-white King Kong (credited here as “Clergy”), closing with an 11-minute technicolor trip (“Bear Melt”), Bless Its Pointed Little Head is a fantastic plastic journey through the Airplane’s early catalog, captured in exciting versions on stage at the popular East and West Fillmore venues in 1968. Originally released as a single elpee, the vinyl experience doesn’t replace the concert experience; instead, it functions as a concert sampler. Wisely, the album samples some of their most popular songs: “Somebody To Love,” “Plastic Fantastic Lover,” “3/5’s of a Mile In Ten Seconds,” “It’s No Secret.” But a good half of the album looks beyond their first four albums with improvisational pieces and covers, including a very cool version of Donovan’s “Fat Angel,” which name-checked the band way back in 1966 with the line “Fly Jefferson Airplane / Get you there on time.” In 2004, BMG expanded the original experience by adding a few more performances from the 1968 Fillmore shows including two tracks from Baxter’s: “Watch Her Ride” and “Won’t You Try.” A self-contained show featuring the Airplane in their fearless and experimental fullness would be a gift (eventually arriving in the mail thirty years later), but this compilation fills the gap for the curious, the initiate and the time-traveling pilgrim alike. Bless Its Pointed Little Head captures what was best about the band’s early live performances and gives you a taste of the Airplane experience without the turbulence of a two-hour concert.

The Pictures
The album cover photo was shot by Jim Smircich. Gary Blackman is credited as art director.

The Plastic
Originally recorded in 1968 at the Fillmore West and Fillmore East and released on elpee on February 1969 in the US (RCA, LSP-4133) and the UK (RCA, SF-8019). The original US elpee featured an insert, which I believe was some kind of small poster designed by the band’s manager, Bill Thompson.