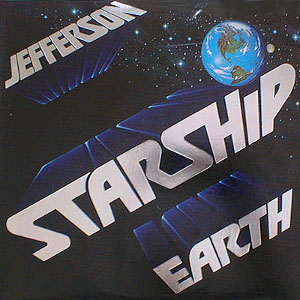 Starlog 4.0: UNITED EARTH. This is the last ride of Kaptain Kantner and the Two Heads (Marty Balin, Grace Slick) in the good ship Starship.  For all the acrimony that was likely under Earth’s surface, this may be the smoothest ride of the four Jefferson Starship albums. It contains two winning ballads from Balin (“Count On Me,” “Runaway”), a nice pair from Grace Slick (“Show Yourself,” “Take Your Time”) and a solid opening shot from Craig Chaquico (“Love Too Good”). Plus, everyone piles onboard the Starship for one last ride on the closing “All Nite Long,” which is a nice sendoff. Still, it’s mediocrity by democracy. Balin and Slick seem like they’re leasing space in the Starship at this stage, carving out their own corner of Earth with Kantner, Chaquico, Barbata, Freiberg and Sears as their backing band. Oddly, this disharmony of personalities was a preferred formula for success during the Seventies, as evidenced by Eagles, Fleetwood Mac and CSN&Y. It provided a richer mixture of sounds, since every ego had to find its outlet, with a little something for everyone. Rock, ballads and mystical sidetrips got rolled together, and while smoking the whole thing was strangely unsatisfying, these everyone-gets-a-turn albums were usually good for a few hits. Like their neighbors the Grateful Dead, the Starship albums had their share of missteps too; this time it’s the embarrassing “Skateboard,” in which Grace Slick philosophizes “If miles turned to inches, you know that man would roll all the way around the world tonight,” which doesn’t make any earthly sense at all. Then again, I don’t have a lot of skin in the Starship saga, and if the original starcaptain had grown long in tooth and dim in vision, the mutinous mutation of Earth is no concern of mine.

All songs arranged by Jefferson Starship.