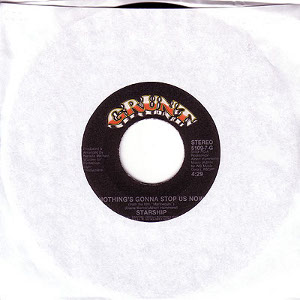 Starlog: 10.5: MUSIC FOR DUMMIES. This song first appeared in the film Mannequin. No irony there. Of course it’s product, written by professional songwriters Diane Warren and Albert Hammond. It also became the band’s most successful song, topping the charts in the US and the UK, so somebody at RCA obviously knows their product. The B side features a live version of “Layin’ It On The Line” recorded at Louisiana State University. Honestly, “Nothing’s Gonna Stop Us Now” is at least as annoying as “We Built This City,” although if I was going to build a Worst 10 Songs of the 80s list it would have to include “Footloose” by Kenny Loggins, “Eye of the Tiger” by Survivor, “Wild Thing” by Sam Kinison, “Physical” by Olivia Newton-John and “Don’t You (Forget About Me)” by Simple Minds, all of which have the distinction of being associated with horrible, horrible visual images.