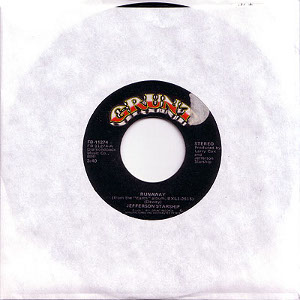 I’ve had this “creator vs. curator” discussion going on my head for the last few days. (There’s always some kind of side conversation going on in my head. It’s maddening at times. I blame parentheses.) Creators write their own music: David Bowie, Roxy Music, I’m not actually going to list them all. Curators collect material from other songwriters and present it to the public under their own brand. Sometimes, the curators have a pang of conscience and try to help the songwriters in their own career aspirations (e.g., Ringo Starr signing Carl Grossman to Ring O’ Records, Marty Balin helping Jesse Barish get a contract) or legitimize the relationship by bringing the songwriters into the band (e.g., Dave Mason hiring Jim Krueger and Jerry Williams for his Dave Mason Band). One of the major distinctions between Jeffersons Airplane and Starship is that Jefferson Airplane were creators of the highest order. Even when they did curate (“Somebody To Love,” “White Rabbit”), the resulting music was a unique work of art. Jefferson Starship owed much of their success to other people’s ideas: Jesse Barish, Nicholas Q. Dewey, Jim McPherson. I’m sure they made money for their authors, and the world is certainly richer for having heard them, so I’m not saying that curation is evil, but it does seem a bit vampiric. Anyway, what’s a bit of bloodsucking in exchange for this runaway success: one of those timeless love songs that reaches through the lost summers of youth and fills you with a warm feeling, like a childhood enema remembered. In the single version, it was cut down by a minute and a half; seems that they spliced the first half and the ending together, deleting the music that appeared after the guitar solo. The flip side, “Hot Water,” (wait, did I already use my one allotted enema analogy? damn!) actually dates from the previous elpee, Spitfire, and suggests that Grace Slick’s creative energies had cooled considerably since her high-flying days in the Airplane.