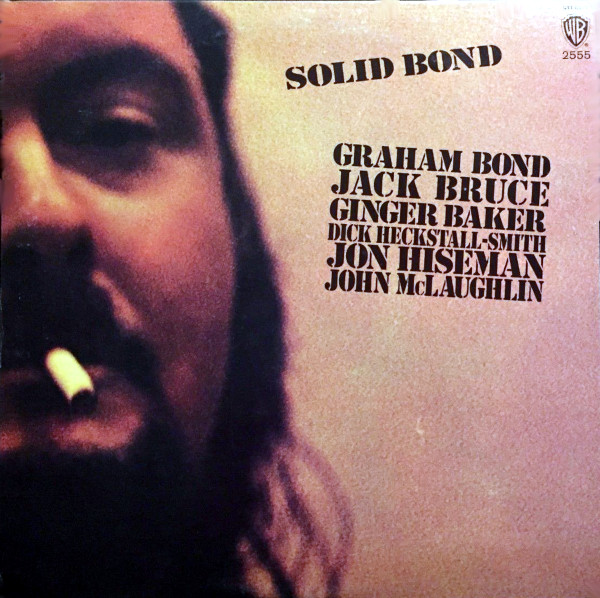 A double-elpee collection of unreleased live and studio recordings from the Graham Bond group in 1963 and 1966.

Graham Bond is dead, kissed by a train, and somewhere in the gilded palace of pain, the organ grinder of souls weeps for the monkey he couldn’t keep. Released several years after the Graham Bond Organisation had disbanded, Solid Bond resurrects an unreleased recording session from 1966 with Dick Heckstall-Smith and Jon Hiseman and adds a few unreleased live tracks from 1963 (this time with Ginger Baker, Jack Bruce and John McLaughlin) to round out a double album of new music.

Although it would be a few years still before Bond punched his own ticket, Warner Bros. rightly understood the man’s legacy and, sadly, it would be as mentor/mephisto to the members of Cream and Colosseum. The album’s respectable charting in the UK was undoubtedly purchased with the cachet that Baker and Bruce brought in a post-Cream world. For their trouble, Creams fans were treated to three extended live cuts at the end, which are as well preserved as anything from the short-lived Quartet with John McLaughlin and showcase the band’s jazzier side. The bulk of the album, however, is a studio recording made after Baker and Bruce had departed, featuring liberal amounts of multitracking from Bond, who plays organ, piano, bass guitar, saxophone and sings.

Originally shelved, the 1966 sessions include a few new originals, covers and returns to familiar haunts. Of the originals, “Springtime In The City” and “Only Sixteen” stand with his work from the first two GBO albums. Their treatment of Booker T. and the MG’s “Green Onions” is also one of the better versions I’ve heard, which number not a few. In order to fill out enough material for a new album, Bond reshuffles “Neighbour Neighbour” and “Walkin’ In The Park” into the deck. Throughout, Jon Hiseman overplays his hand, Dick Heckstall-Smith plays to no one (on account of his being too low in the mix) and Bond plays with himself most of time through the magic of multitracking. As a swan song, it’s something of a turkey, but you probably knew that going in when you saw that Bond struggled to get top billing on his own album.

The live performances with Baker, Bruce and McLaughlin featured Bond near the peak of his saxophone period. With no sign of the Hammond organ anywhere, Bond and the band blow through two loosely arranged originals and a cover of Sonny Rollins’ “Doxy.” McLaughlin is all but invisible on “Ho Ho Country Kicking Blues,” but nearly steals the show on the next two tracks. For those interested in hearing McLaughlin alongside Baker and Bruce, side four of Solid Bond is the best place to start. It’s a different side of the band during their jazzy guitar phase, before the blues-driven energy of The Sound of 65, but one well worth hearing if only for the assemblage of talent involved.

Given the disappointing fact that Bond went off the musical deep end in the late Sixties, never to return, Solid Bond is the safest bet to please fans of his first two records, even if it’s hardly his best work. It’ll at least spare you from listening to thirty minutes of satanic prayers set to music as you secretly wonder what Bond’s mystical kimono smelled like in an enclosed studio.