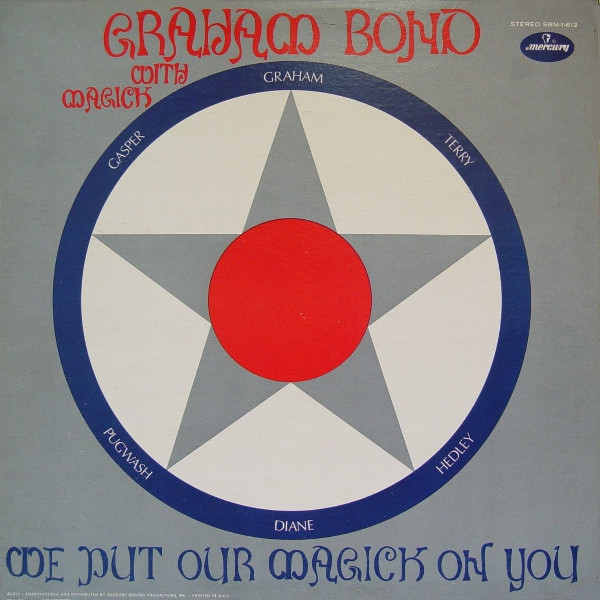 More songs about witches and druids. Not as off-putting as his last, but a full band is no substitute for a full deck.

At this point, Bond was a lost cause. He still had talent, a contract, a backing band and a passion for playing music, but he’d lost his marbles. The Aquarian/Druidic creed spewed by Bond and his new wife, Diane Stewart, is as ill-fitting to these powerful blues/folk/rock arrangements as the ceremonial robes on Bond’s ever-widening frame. It’s as though Bond had split into two people: the musician (who retained his playing abilities) and the magician (who had thrown out his reason).

His last record, Holy Magick, was an unholy mess: a sacrilegious ceremony set to music on one side, bizarre songs set to the blues on the other side. For this followup, Bond and Stewart conscripted Steve Gregory and Gasper Lawal from Ginger Baker’s Airforce and added some notable names including Hedley (Henry) Williams (Wild Turkey), Terry Poole (Bakerloo Blues Line) and John “Pugwash” Weathers (Gentle Giant). The music sometimes approaches the sound of Traffic (e.g., “Ajama”) but otherwise sticks close to the organ/sax-driven blues synonymous with Graham Bond (e.g., “Forbidden Fuit,” “Hail, Ra-Harakhite”). It’s Bond’s best lineup since the Organisation, with Magick getting a co-credit on the cover and full credit for the arrangements. Credit for the lyrics, however, go directly to Stewart and Bond. When Bond sings that he’s a druid of Stonehenge on “I Put My Magick On You,” it’s not frightening or enlightening; you can see the strings of the bat in the background, and realize you’re being conned.

The Stewart-Bond dynamic was clearly an unhealthy one. At times, they remind me of the anti-Bramletts. Musically, Bond might have eked out a modest existence as a session player and bandleader for the remaining blues-rock faithful who hadn’t moved on to psychedelic or progressive rock, although there are elements of both in Bond’s later music. By singing songs about witches and druids and vocalizing their plainly unorthodox faith, they marginalized themselves and undermined their efforts. There are curious occultasters who might enjoy We Put Our Magick On You. It is not required listening. If you feel the need to buy one of Bond’s later albums, Love Is The Law has better material including a much more moving version of “Moving Towards The Light,” which I’ve always seen as something of a signature song for Bond in his final years.

All songs arranged by Magick.
* Vertigo elpee version swaps A4 and B1 tracks.