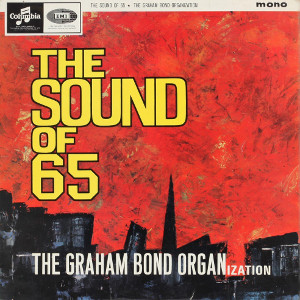 This is what it sounds like when Ginger Baker is not the craziest member of your band. Bond plays like a man possessed.

Rock and roll has produced some eccentric figures over the years; few loomed as large as Graham Bond. Roky Erickson and Don Van Vliet come to mind, although Bond’s demons appear to have got the best of him, and he died tragically young under the wheels of a train. But that was the end of the line. The Sound of 65 is the bright beginning, Bond and a matchless lineup of Ginger Baker, Jack Bruce and Dick Heckstall-Smith putting down pure magic on the magnetic tape.

It’s tempting to look at The Graham Bond Organization as a launching point for Baker and Bruce but, truth be told, they’re the least interesting half of the band. Bond and Heckstall-Smith are amazing, and the organ and sax in tandem push what might have been merely proficient R&B into the realm of the profane. Other bands played R&B with sax and organ, none of Them (or the others) matched the intensity of Bond. Sure, there was something unspeakably cool about The Rolling Stones, but they didn’t take you to the same dark places as “Early In The Morning” (featuring some incredible backing vocals from Jack Bruce), “Hoochie Coochie” (check out how Bond slurs “seventh” with “sabbath” or his perverse pause after the word “come”), “Baby Make Love To Me” and “Got My Mojo Working.” You get the sense, listening to them now, that dark magick was afoot even then.

In explaining the album’s lack of commercial success, some have suggested the band was too rough for jazz purists and too jazzy for the rest, but I don’t think that’s it. I would argue that the band was simply too intense for most listeners. Live, you couldn’t help but fall in love with the band’s energy. But was the world really hungry for white voodoo music in 1965? Apparently not.

The record does try its hand at more commercial fare at the end, with a straight R&B number featuring Jack on vocals (“Half A Man”) and the surprisingly sweet “Tammy.” It’s too little, too late, and too much strange water has rushed over the bridge to change your mind about the band. In later years, the original elpee was expanded with bonus tracks, including the wonderful “Love Come Shining Through” and a cover of “Long Tall Shorty” that destroys The Kinks’ tepid version.