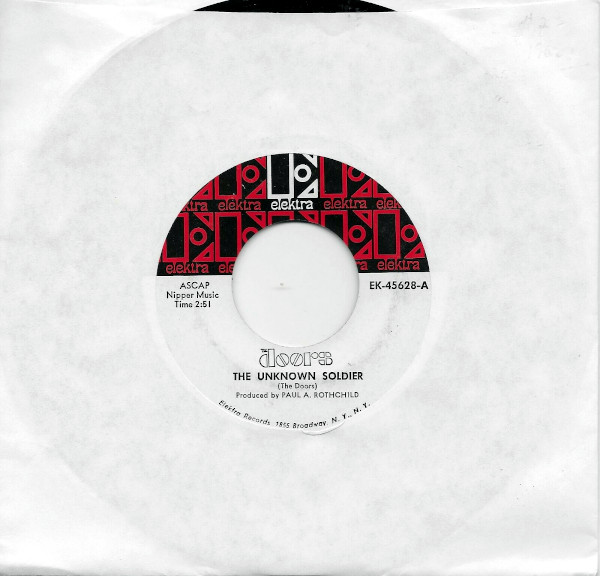 If you can make television from war, why not a top 40 single?

War had become theater thanks to television news, so what better for a pair of film majors like Ray Manzarek and Jim Morrison to do but create a short film around their new single, The Unknown Soldier. It’s an unlikely single with a very quiet beginning and a long, dramatic pause in the middle, but these were unlikely times. Like most everything from Morrison, both the film and the song were fearless. I have to admit, it’s disquieting to see Morrison get shot in the film, but even more unnerving to see the rest of the band walking away without him at the end, a specter of things to come. Of minor interest, the single version varies slightly form the elpee version that appeared on Waiting for the Sun.

“It seems to be a very simple song that someone’s got hold of and gimmicked up with manufactured sound effects…. Sometimes it seems the recording engineers and the producers would be happy if they could find a way to produce records without using people or instruments.” — a prescient Marty Feldman, reacting to “The Unknown Soldier” in a 1968 Melody Maker article.

The B side, We Could Be So Good Together, if not entirely original (you can hear the audible influence of “Alabama Song,” for instance) is still played in a style that is unique to The Doors. The guitar solo from Robby Krieger on this is just freaky; producer Paul Rothchild either double-tracked it or did something weird to it. Rothchild had become sort of a fifth Door at this point, with a very audible influence on the music. In a sense, he was the captain at the wheel, with Morrison tied to the mast as a living sacrifice to the gods.