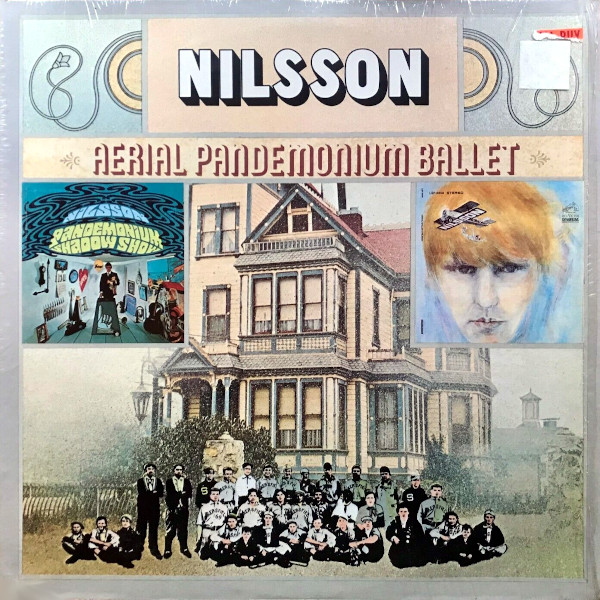 New vocals and a new mix for old songs from his first two RCA albums.

I thought Pandemonium Shadow Show and Aerial Ballet were just great. Apparently, Harry Nilsson didn’t, and elected to remix a selection of tracks from each album and re-record some of the vocals, releasing the result as Aerial Pandemonium Ballet. It’s an interesting idea, this revisiting of the recent past, and a few of the songs sound slightly better. Whether you want to pay money for slightly better versions of songs you may already own and be familiar with, well, that’s what free will is for.

Like Pandemonium Shadow Show, this album features an Introduction and Closing that are essentially edited versions of the intro/outro that appeared on the aforementioned album. What follows is a selection of the best songs from his first two RCA albums: Everybody’s Talkin’, One, Good Old Desk, Without Her, 1941, etc. Some of these versions are nearly identical to the originals, such as “1941” and “Good Old Desk.” Some sound the same but feature additional “scat” singing (Daddy’s Song, Mr. Richland’s Favorite Song), which I find distracting. I’d give the new versions of “Without Her” and Bath the nod as superior to the originals by a nose.

Most artists wouldn’t revisit their recent catalog and give it a new coat of paint. Nilsson, of course, was not like most artists. Maybe he was a perfectionist, an eccentric, or likely a bit of both. Whatever the reason, Aerial Pandemonium Ballet is a strange animal, a kind of golden hits with a platinum production finish. In the new millennium, the album was augmented with a handful of bonus tracks that sweetened the pot for fans who were on the fence, including a great version of John Lennon‘s Isolation.