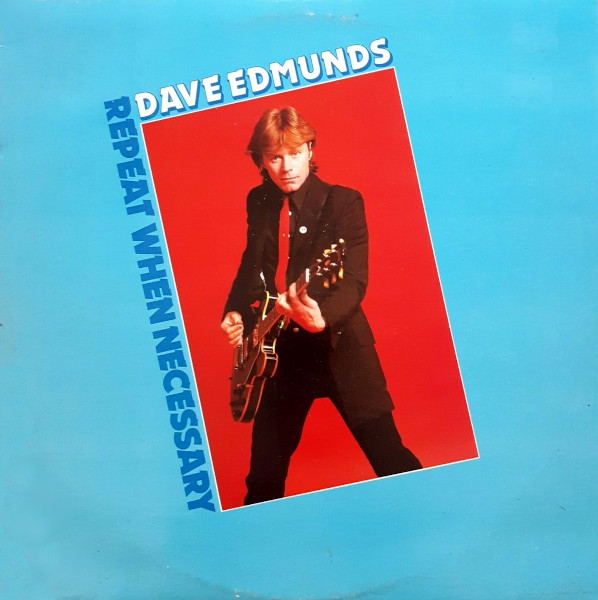 This is more or less a Rockpile record featuring tunes from Elvis Costello, Graham Parker and Hughie Lewis.

The idea of a Dave Edmunds album without a single song written by the man himself might seem a slight, but Repeat When Necessary is no cop out. Edmunds is essentially a cover artist (a point the album title and cover make plain) who puts his emphasis on quality rather than originality. He is a gifted guitarist and producer, and an unabashed admirer of rockabilly who can take a 20-year-old song by Ronnie Self (“Home In My Hand”) or a new song by Billy Bremner (“We Were Both Wrong”) and make them both belong in the same moment musically.

The album is notable among new wave aficionados for the opening trio of tracks: Elvis Costello’s “Girls Talk,” Graham Parker’s “Crawling From The Wreckage” and Bremner’s “The Creature From The Black Lagoon,” the latter sounding like a an early, lost Squeeze song. Also included here are the first recorded versions of “Queen of Hearts” (later popularized by Juice Newton) and Hughie (Huey) Lewis’ “Bad Is Bad.” Featuring the rest of Rockpile (Bremner, Nick Lowe, Terry Williams), Repeat When Necessary sticks to rockabilly for the rest of the way, including a rollicking version of “Sweet Little Lisa” featuring the sensational Albert Lee on guitar.

Throughout the record, Edmunds alters his voice to match the material and applies the same painstaking production; the Spector-ish “Take Me For A Little While” is a highlight. Like Get It before it, Repeat When Necessary is a very necessary addition to any Edmunds collection (and a fitting companion to Lowe’s Labour of Lust, released a day later). It’s hard to believe that some enterprising label hasn’t released a remastered version of this record yet. (Note: Initially, I had a lukewarm reaction to this record, but I must have been in a rockabilious mood that day.)