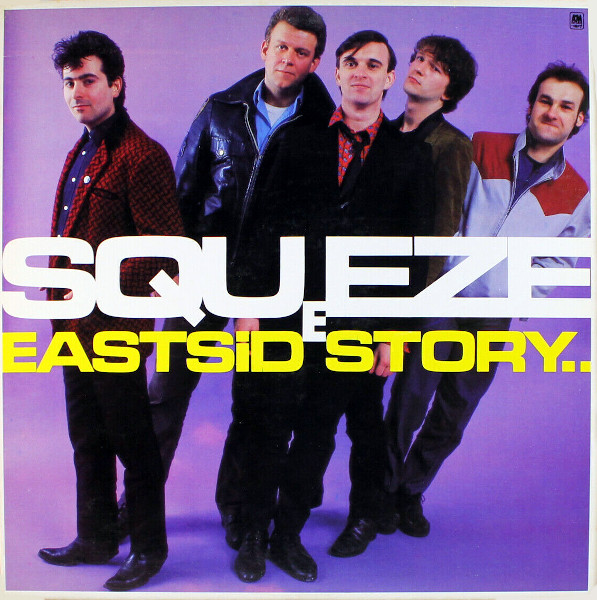 I’m not sure that even The Beatles ever made an album this good.

Kronomyth 4.0: Pure pop to get you happy.

This is always an occasion to get happy all over again. My love affair with Squeeze started when I heard this album playing from a pair of cheap speakers in Caldor’s. I immediately took East Side Story home, and it’s been domestic bliss ever since.

This remains to my mind the quintessential Squeeze album, a gem from any angle. You have the uncontainable energy (Picadilly, In Quintessence, Mumbo Jumbo), the soulful ballad (Tempted), the clever crossover into country (Labelled with Love) and the list goes on. It’s on this album that the comparisons to The Beatles hold, going so far as to credit individual vocals like Rubber Soul and Revolver. Glenn Tilbrook even sounds like a ringer for Paul McCartney on There’s No Tomorrow, and Vanity Fair could be seen as his “Eleanor Rigby.”

It’s not just the range of the material that impresses, but the sympathetic production from Elvis Costello and Roger Bechirian. That pair understood the power of packaging maximum pop while alternating the tempo, as evidenced on landmark pop albums like Get Happy!! and The Specials. Yet the victory belongs to Squeeze. Elvis albums, no matter how brilliant, rarely stepped outside of themselves as Squeeze does here (though Trust marked a similar shift in strategy). Songs like “Tempted” and Messed Around might have been mere costume changes if not for the convincing performances.

The sweet/sour track placement also makes a difference, with the noisier pieces (Someone Else’s Heart, Heaven, F-Hole) afloat in a sea of calm joy. You’ll find that manipulation of mood most apparent when Someone Else’s Bell rolls around, which takes an extra breath before bringing the discussion back into the warm arms of pop. Both Costello and his mentor (if one might be so bold), Nick Lowe, knew how to set a table and serve their dishes in the right order. And East Side Story is nothing if not a well-served feast. Argybargy seems a bit raw by comparison, Sweets from a Stranger overcooked, but East Side Story is pop music done to perfection. At the risk of waking the hounds of hyperbole, I’d call this one of the most effective pop albums of all time.

All songs written by Glenn Tilbrook and Chris Difford.

CD reissue bonus tracks
15. The Axe Now Has Fallen
16. Looking for a Love