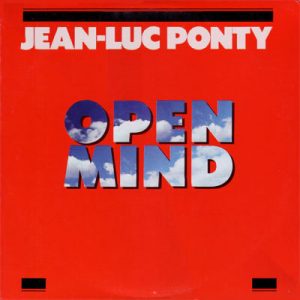 More violin music for happy robots. Like his last release, Individual Choice, this is a true solo album with Ponty playing violin, synthesizers and rhythm computer. (I don’t know how you play a rhythm computer, but it doesn’t sound fun.) His music having grown increasingly mechanical over the years, it was all beginning to sound like a digitized kaleidoscope: complex patterns shifting in the background while new sounds appear and disappear on the surface in colorful bursts. Many jazz fusion artists suffered the same mechanical mindmeld in the ‘80s. (Exhibit A: the synthesizer solos from Chick Corea on “Open Mind” and “Watching Birds.”) Ponty was probably better suited to cyborg jazz than most given his limited expression of late: pattern, solo, repeat. There is some freedom in the formula; “Orbital Encounters” could pass for a Frank Zappa track. And Ponty approaches his music with a joie de vivre that shines through the circuitry. But I’ve always felt that jazz does best in steamy and smoky settings. Open Minds is climate-controlled jazz fusion with Ponty potted and placed near a sealed, sunny window. Despite some dull moments, it’s not a bad record. “Open Mind,” “Orbital Encounters” and the rich, smooth flavor of George Benson on “Modern Times Blues” are enjoyable. However, a certain stinginess in packaging and performances conspires to make Open Mind one of his least essential efforts to date. For some reason (perhaps I’m attracted to the color red?), I’m most likely to pull out this or Mystical Adventures when I’m thusly violinclined, and after 20+ sittings it still hasn’t spun its spell.