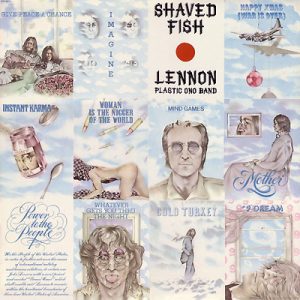 George loved God, Paul loved Linda, Ringo loved a good time and John loved a good fight. As Apple was sinking, they fired off a pair of parting shots from John and Ringo. Blast From Your Past was a blast all right, but Shaved Fish gave us food for thought. Just take a look at the cover: a naked, hooded woman attacked by lipstick missiles; a tearful John dressed as his mother; John with eight eyes, a face growing out of his head, a face disappearing in ever-present clouds. A mind unchained, an individual locked in the human condition, this was the enigma of John Lennon. The songs on Shaved Fish are nothing if not enigmatic. Enjoyable? Sure, some of the time. But more often uncomfortable. They played “A Dose of Rock ‘N’ Roll” on the radio, but they didn’t play “Mother” or “Cold Turkey” or “Woman Is The Nigger of the World.” That last song, incidentally, might be just about the best thing John has written since The Beatles, barring maybe “Instant Karma.” Of course, Shaved Fish is nothing more than holiday product released by a withering Apple. But it’s also the single best representation of John Lennon’s difficult muse up to this point. Unfortunately, it would be followed by five silent-as-snow years. Speaking of silence, to honor an old debt, here’s a look at what a 1972 Beatles album might have looked like: Hi Hi Hi / Woman is the Nigger of the World / Back Off Boogaloo / Give Ireland Back to the Irish / While My Guitar Gently Weeps (Live) / Wild Life / C Moon / John Sinclair / Here Comes the Sun (Live) / Happy Xmas (War Is Over). They don’t usually shake out as well as you’d think.