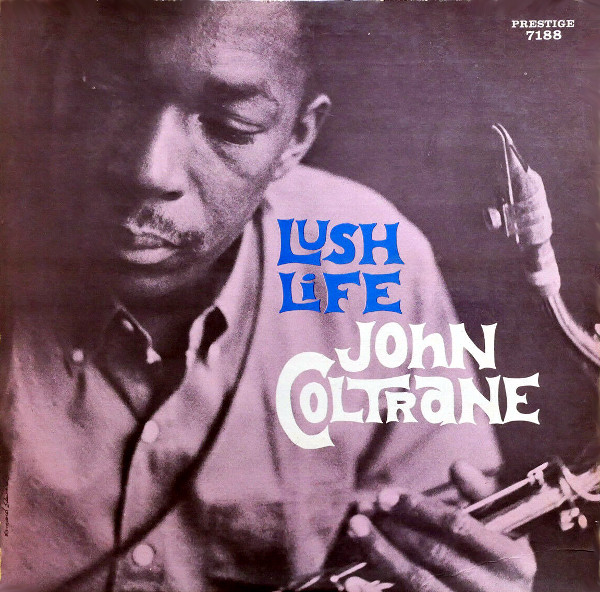 An archival release of Prestige sessions from 1957 and 1958 featuring a rare trio combo and the classic Red Garland quartet.

The trouble with music critics and John Coltrane is that they’re rarely critical of the man. He was a giant talent, make no mistake, but he was also a human being and, in 1957, one recovering from the very human frailty of heroin addiction. He made some good jazz recordings for Prestige despite that, but only two—John Coltrane with The Red Garland Trio and Soultrane—that I would consider great. After he left for Atlantic Records in 1960, Prestige continued to release old recordings to capitalize on his growing fame, and critics fell for it hook, line and tenor.

Lush Life is cobbled together from several sessions. The songs on side one date from 1957 and feature a trio with Earl May on bass and the familiar Arthur Taylor on drums. May was a member of Billy Taylor’s trio, so he fits in well enough despite not having played with Coltrane before (to my knowledge anyway). Like Someone In Love opens with Coltrane’s smooth-as-butter sax but never really settles into a groove. Despite being recorded by Rudy Van Gelder, the mix sounds very thin; maybe that’s Prestige’s fault or just the pressing by Original Jazz Classics I’ve heard. I Love You starts with a cool Latin rhythm from Taylor before shifting gears into a swiftly played number. Coltrane crams as many notes as possible into the arrangement, but I think he overplays his hand. Trane’s Slo Blues is the album’s lone original and features what has to be one of the most stultifying bass solos I’ve ever heard. All totaled, the first side of Lush Life makes me appreciate the fact that Coltrane didn’t revisit the trio format.

Side two brings Red Garland and Paul Chambers back into the fold, and all is right with the world again. The nearly fourteen-minute Lush Life is the album’s crown jewel, a classy affair that immediately brought me back (forward?) to his inspired pairing with Johnny Hartman. I Hear A Rhapsody is smartly played and snaps with a crisp attack from the rest of the band. There’s something about Coltrane, Garland, Chambers and Taylor that just clicks.

So, what you have here is half a good album from the first classic Coltrane Quartet and half an album of trio music for history buffs. In spite of critical enthusiasm to the contrary, Lush Life is far from essential. In fact, I’d tell you to forego the purchase altogether and pick up something by Donald Byrd, Ben Webster, even Red Garland without Coltrane if you haven’t already. Jazz is a big world, and it’s high time you peeked over the garden walls to see what else is out there.

* Spelled as “Trane’s Slow Blues” on the back cover.