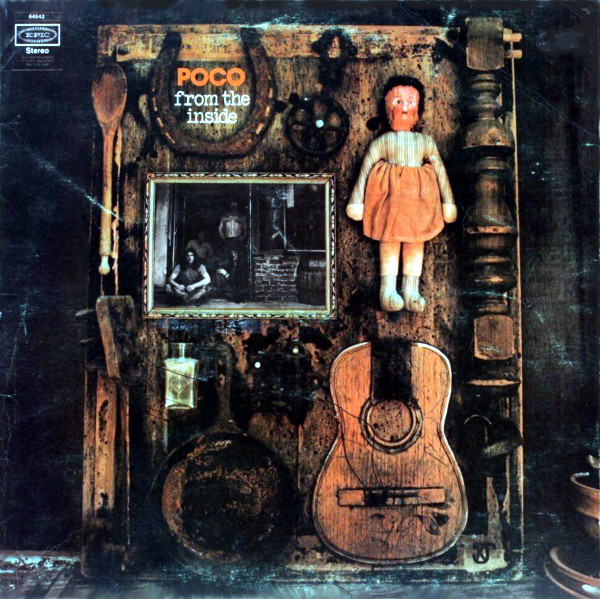 If you like simply produced country-rock music, you may be into this, but I haven’t cottoned to it yet.

From The Inside is probably my favorite album… from Alice Cooper. From Poco, not so much. In Jim Messina’s departure, the band lost not just a founding member but a producer. Paul Cotton is a fine addition, don’t get me wrong, but producer Steve Cropper doesn’t really get what makes Poco special. They weren’t just another country-rock band of competent musicians, but a group that could surprise you with really pretty songs in a range of styles. That side of the band never emerges on From The Inside. A lot of bands could have made an album like this; bands with a lot less talent than Poco.

The opening “Hoe Down” is, hands down, the hokiest country song they’ve done. That twangy taste in your mouth doesn’t go away during “Bad Weather” (which sounds a little like Neil Young if you close your eyes and try to imagine Neil singing a mediocre country song) and the done-to-death, down-in-the-dumps, honky-tonk piano ballad “What Am I Gonna Do.” Fortunately, the album improves as Richie Furay and the boys inject some much-needed rock into the country-rock mixture (“Railroad Days,” “What If I Should Say I Love You”), it’s just too little, too late.

Furay has gone on record as saying that Cropper wasn’t a great match for the band, and I’ll admit that he doesn’t do Poco any favors with his understated production, but ultimately the fault lies with the underdone material. You’ll find some of the old creative spark on songs like “From The Inside,” “You Are The One,” “Just For Me And You” and the two aforementioned rockers. That leaves you with half of a pretty good Poco album matched with half of a crappy country album, produced by a musician’s musician (Cropper) who underestimated how much polish these songs needed. Cropper’s greatest sin, it seems, is letting the quality of the songs speak for themselves.

As Paul Cotton’s inaugural album with the band, From The Inside isn’t an inconsequential album. It just isn’t a very good album. Rusty Young seems buried in the mix much of the time (did Poco still need three guitarists?) and I feel like the harmonies should have been better with four singers in the band. If you’ve been itching for the band to kick up their cowboy boot heels, maybe “Hoe Down,” “Ol’ Forgiver” and the rest of these songs will be a hoot to hear, but why fly with this turkey when you could be soaring with the Eagles?

Front cover assemblage is a gift from Kathy Johnson. Album photography and design by Barry Feinstein and Tom Wilkes.