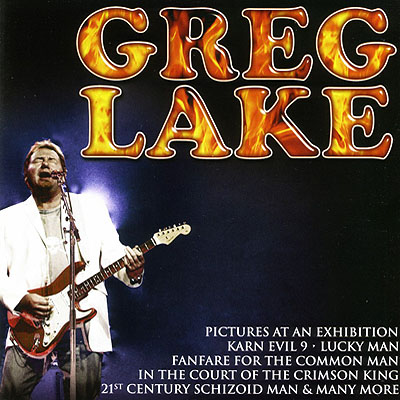 New faces and old favorites intersect on this concert disc culled from the Greg Lake Band’s 2005 tour of the UK and Germany.

In 2005, a new Greg Lake Band was formed and hit the road. I mention this just in case you didn’t know. In 2007, a live disc was released from the tour, the cover of which you were looking at just moments ago and thinking, “That shameless William Shatner will hawk anything, even the latest Greg Lake CD.” If the cover art isn’t enough to make you want to buy this on the spot, let me nudge you a little: this disc sounds waaaay better than it looks. Imagine those latter-day live Camel albums with more singing and less guitar soloing.

Greg Lake is, after all, as close as prog rock has to royalty. On this disc, the king returns to recount his glory years with King Crimson and ELP. Far from tired and twice-told tales, these songs are made to feel new again. Listen to Lake’s fearless performance of Pictures at an Exhibition; if that doesn’t give you chills, you need to turn the heat down.

Of course, since half of these songs are over thirty years old, they’ve been caught on other stages, most recently on ELP’s 1997-1998 tour. Only Farewell to Arms (from Black Moon) had yet to be captured live on disc, and it’s honestly one of the duller entries on here. Better by far are the storming version of 21st Century Schizoid Man and the stately Take A Pebble, which features a Spanish guitar solo from 22-year-old wunderkind Florian Opahle.

One point worth making: I’m not sure how much (if any) post-doctoring took place, but the audience is almost absent from the equation. The opening lines of Touch and Go, instantly recognizable, are greeted with silence. I mean, Greg Lake’s fans aren’t that old. It’s the mutual love between audience and artist that’s missing on this disc. I wasn’t in a hurry to leave; I wanted to hear stories, jokes, engage a king in crowded conversation. But the king simply leaves the building under fading applause, and we wonder when we’ll meet again.