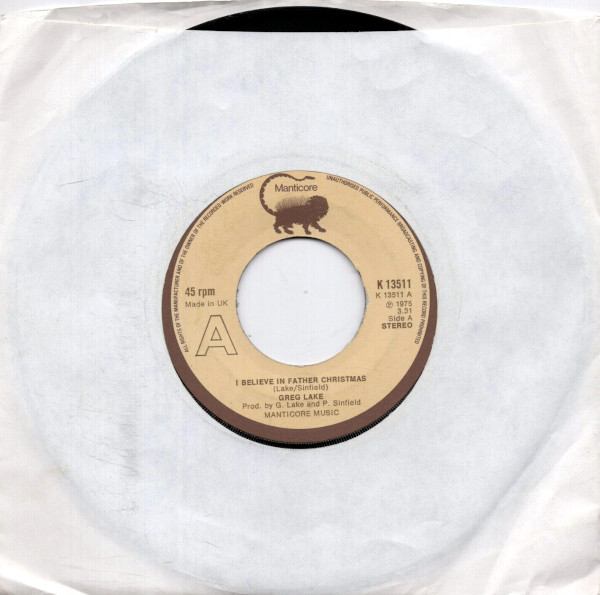 A Christmas song with a message about commercialism or lost innocence or possibly both.

While the show may not have ended, it seemed temporarily suspended when Greg Lake and, later, Keith Emerson released singles under their own name. I Believe in Father Christmas, co-written with King Crimson/ELP lyricist Peter Sinfield, was by far the more successful of the two, nearly displacing Queen’s “Bohemian Rhapsody” from the top of the charts. It’s a “serious” Christmas song, continuing a long tradition of English seasonal songs with a conscience (“A Christmas Song,” “Father Christmas”). More importantly, it’s a remarkably pretty tune and one of Lake’s best ballads, which is saying something.

The B side is a lighthearted instrumental featuring whistles, clarinets, a little bit of Brahms and the song’s title half-hummed/half-sung repeatedly. Just the sort of thing you might expect The Bonzo Dog Band to release, minus the inevitable spoon solo. ELP later released their own version of “I Believe in Father Christmas” on Works Volume 2, though “Humbug” remains unique to this single. Back to front, this is one of the best holiday singles I can remember.