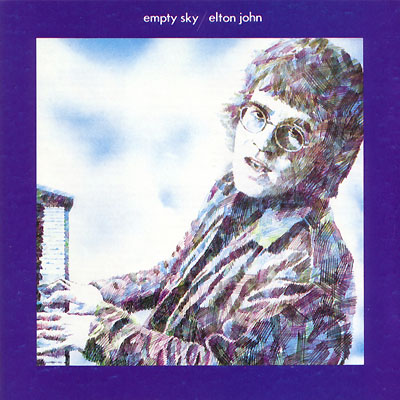 Elton and Bernie’s first can be filed alongside such false starts at Man of Words, Man of Music and Whatever’s For Us.

Like the late-night prayers of little children, these early works slip smokewise out of music factory windows and into the cold, noisy world at play. In the din of 5 to 12, nobody hears them; they die, or dissipate, and the blush of idealism drains from another rose. Should the rose grow stronger later, these old tones become the glee of graverobbers who sell them off as saint’s relics.

And so it was that I encountered the early wonders of Saint Elton, a riddle wrapped in a Sphinx wrapping a reissue from 1975. Like the early albums of David Bowie (Man of Words…) and Joan Armatrading (Whatever’s For Us), Empty Sky belongs to that strange phase in the journey when an artist stands at the bottom of the mountain and imagines what the top must look like. With time, the summit becomes clearer in the artist’s mind, and the early imaginings are revealed for what they are. On songs like “Skyline Pigeon,” “Val-Hala” and “Western Ford Gateway,” Elton and lyricist Bernie Taupin offer a glimpse of the great places they would go on later albums. But there’s nothing on Empty Sky that would instantly place them on the next plateau, no “Space Oddity” to catapult them into orbit. This is post-Traffic precocity: flutes, harpsichords, freaks in formaldehyde.

If you’re going to stare at Empty Sky at all, pick up the expanded remasters, which include the early singles “Lady Samantha” and “It’s Me That You Need.” Here, more than anywhere on Empty Sky, is the electric Elton anticipated. You can opt out of this album altogether with no sensible emptiness to suffer, but there’s no such dodging his next album, Elton John.

All titles written by Elton John and Bernie Taupin.