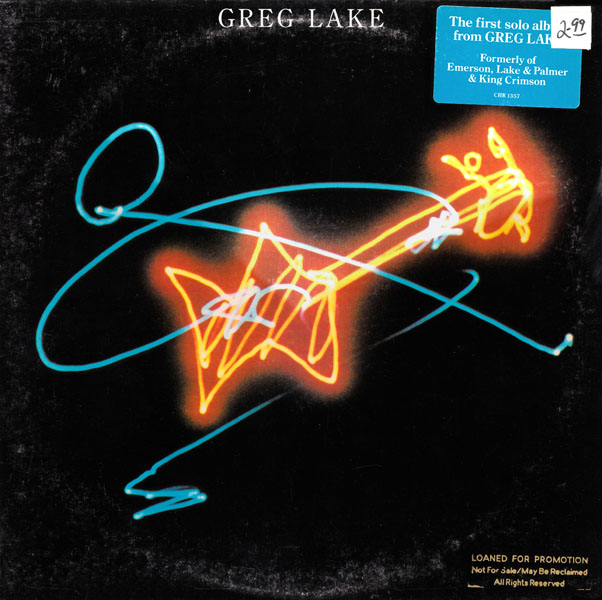 Greg Lake and Gary Moore together will make you thankful that ELP never had a guitarist.

Kronomyth 1.0: Let me go once before you love me.

He put the L in ELP, but you have to wonder what the L he was thinking with this album. Billboard called it “loaded with steamy rockers and touching ballads,” and while I’ll concede that a good half of this album is steaming, I wouldn’t suggest touching it. This is not, for the record, progressive rock in any sense of the word that I’m familiar with. It is wanky 80s guitar rock: a mix of melodramatic vocals and histrionic hair-metal guitar courtesy of Gary “more is definitely not” Moore.

The opening Nuclear Attack, a title that would accurately describe Moore’s approach to his instrument, is exactly the sort of empty corporate product that sent me running to prog in the first place. Moore puts on a pyrotechnic pony show, Lake sings about the impending nuclear Armageddon, and you’ll be praying it comes quickly. It doesn’t, and so you’re left listening to an obscure Bob Dylan song that Lake apparently altered enough to justify tacking his name on as a cowriter (“tacky” being the operative word here). Lake wisely returns to his strong suit, romantic balladry, for It Hurts, nicks a Fleetwood Mac song (Black and Blue), and closes with the album’s strongest rocker, Retribution Drive.

The heroic balladeer of yore returns briefly on the second side. It’s by far the better half, mixing stately rock songs with romantic ballads. If you enjoyed survived the first half of Love Beach, the second half of Greg Lake offers more of the same. Lake seems to have struck upon a good songwriting partnership with keyboardist Tommy Eyre and cartoonist-in-residence Tony Benyon. The only misstep on side two is the professionally penned Let Me Love You Once Before You Go, a ballad unbecoming the man who once sang “C’est la Vie.”

I expected more from Lake; more than I expected from John Wetton, whose Caught in the Crossfire is the better album in every way. And if you’re thinking that an over-the-top album of rockers and ballads was all leading to Asia, no. Asia plays rings around this. There is nothing that Lake has done after ELP that can detract from his monumental achievements, but he’s done little since to add to those achievements, which is a disappointment. Greg Lake is a disappointing record, unless you showed up to hear Gary Moore shred, in which case I would point you to Moore’s Corridors of Power, which also featured Eyre.