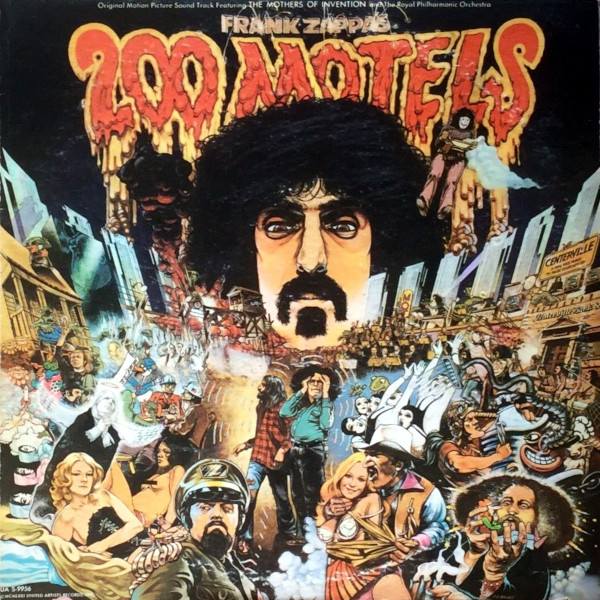 This probably should have come with a free bar of soap and shampoo, since you’ll need a shower after listening to it.

The members of the Royal Philharmonic Orchestra were apparently less than thrilled (in the back of my car) that they had to play this music. Just going out on a limb here, but maybe those guys know a thing or two about good music. Of course, there are other people who will tell you that 200 Motels is a work of genius, but they’re presumably the same people who say nice things about Lou Reed’s Metal Machine Music.

In defense of the orchestra, I doubt your average concert violinist wakes up in the morning and says to themselves: “Gee, I hope I can put my years of training to use playing a song called ‘Penis Dimension’ for some greasy rock and roll band today.” And in defense of the composer, “Strictly Genteel,” “Tuna Fish Promenade” and “What Will This Evening Bring Me This Morning” are brilliant in their own unorthodox way. Unfortunately, a lot of 200 Motels sounds like a low-budget soundtrack to a horror movie fell into a taffy machine with some early Mothers tapes.

Frank Zappa clearly had modern classical composers in mind when he wrote the instrumental sections, employing a linear style that elevated dischord and tension, moving ever-forward without achieving any resolution. What he had in mind while writing the lyrics was, apparently, to capture the road life of a traveling rock band in all of its appalling ugliness, from bad food to sexually frustrated groupies, culturally insensitive cowboys and the temptation of stealing towels from the motel room. As you might expect from such a strange pairing, the result is indigestion. There are isolated moments that are funny, freaky and fitfully inspired, but do you really want to chew through two hours of avant-garde film music and sexually explicit dialogue for a few tasty morsels when you could be cutting into the filet mignon of Hot Rats or The Grand Wazoo?

At the time, Frank’s classical scratchings may have sounded like the future of music. Forty years later, that apocalypse has thankfully been averted. I don’t think anyone makes music like “Lucy’s Seduction of a Bored Violinist & Postlude” or “A Nun Suit Painted On Some Old Boxes” these days except for shock value. You could argue that shock was Zappa’s intent from the beginning for 200 Motels, but the man had too much respect for music to peddle it as a novelty. It’s better to view 200 Motels as a big, messy experiment that failed to match its high-budget ambitions with execution. Also, Zappa has a tendency to grind his axe sometimes (e.g., picking on Jeff Simmons’ defection during the existential crisis of “Dental Hygiene Dilemma”) rather than play it.

Apparently, the music from the film doesn’t align exactly with the double-elpee soundtrack. I was too young to catch this cult film during its midnight showings and, frankly, feel like I’ve already served my sentence by listening to this soundtrack more than a few times. The fact that few people seem to have sat through both works, let alone enjoyed them, speaks volumes to the windmill-tilting nature of the film and subsequent soundtrack.