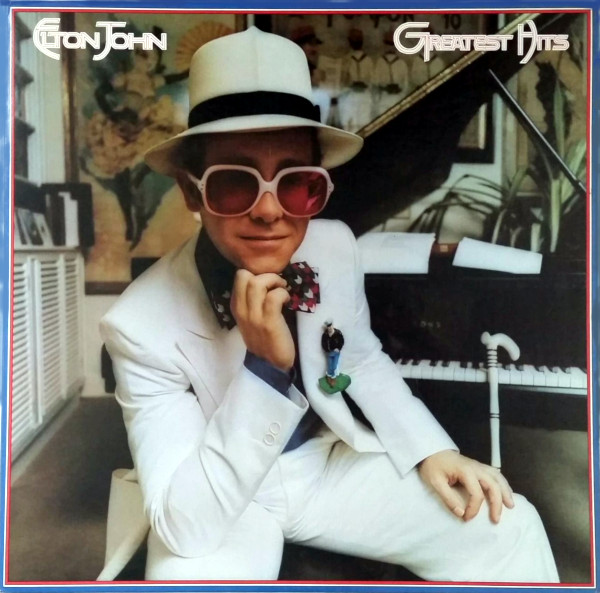 Elton’s best-selling album collects all of the big hits through the first half of the 70s.

Somewhere around Honky Chateau, it became clear that you were only going to find two great songs on any given Elton John album, a rocker and a ballad. I’m not complaining, since those two songs were usually worth the price of the album, but you secretly wished you could just cut out the filler. Greatest Hits cuts out the filler. It’s not just pure gold, it has gone platinum seventeen times over since its release—and those are just the U.S. sales.

I don’t have an opinion on Greatest Hits. Everyone already owns this record. My parents owned this record. They owned maybe two dozen albums, and at least three of them were by The Carpenters. I don’t even think they owned a Beatles album, but they had Elton John’s Greatest Hits. Years later, my Dad bought Don’t Shoot Me I’m Only The Piano Player on compact disc. I’m pretty sure he plays the first track (“Daniel”), skips forward to “Crocodile Rock” and then hits the eject button. (In my Dad’s defense, he did own two Cat Stevens albums.)

When I was in the fifth grade, I went through an Elton John phase where I was convinced he was the greatest musician of all time, even eclipsing The Beatles. That’ll happen when the first Elton John album you own is Goodbye Yellow Brick Road; with time, you come to realize that not every Elton John album is brilliant. On the remote chance that you’re not familiar with Elton’s body of work, and I can only imagine this applies to younger listeners, Greatest Hits is a great place to start. Then I would pick up Yellow Brick Road, Captain Fantastic, Rock of the Westies, maybe Madman Across The Water (which this compilation skips over) and move on.

Of minor interest, the US and Japanese versions of Greatest Hits featured “Bennie And The Jets” in place of “Candle In The Wind.” In 1992, both tracks were included on an expanded 11-track version.

All songs written by Elton John and Bernie Taupin.
*Non-US/JPN elpee versions replace “Bennie And The Jets” with “Candle In The Wind.”