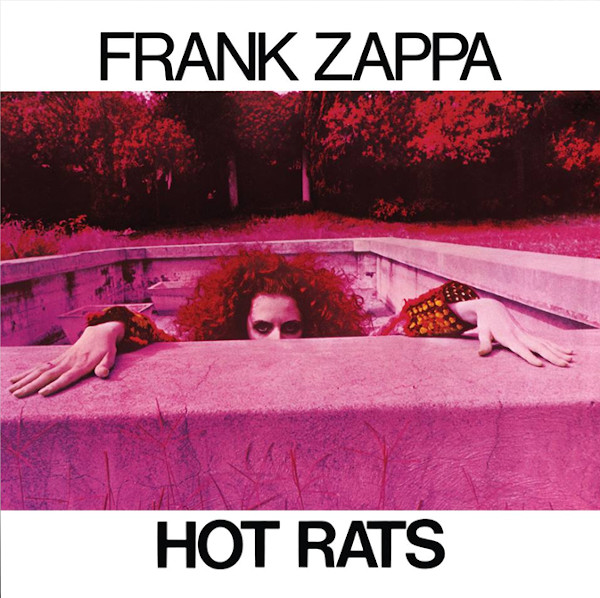 A mindblender of jazz, classical and rock music that stands as one of the greatest albums of the twentieth century.

When the croci in my mind are blooming, then Frank Zappa’s whimsical and colorful genius must be in full flower. I see you in the back of the class, looking out the window while all this wondrous music plays on. Well, wake up! Thirty years on, your grandchildren may quiz you on Frank Zappa and Where were you when it all happened. Do you want to be the doddering old fool who pulls out a picture of the sofa bathed in the blue light of the television and point saying “There?” No you don’t. You want to tune into Hot Rats.

The wonderful thing is, there’s still time. Oh, the good seats on the ground floor are already taken, but there’s plenty left in the mezzanine, as good a place as any to witness the miracle of “Peaches En Regalia” or “Son of Mr. Green Genes,” where the composer turns our concept of classical music on its head and gives it a much-needed spanking. Or, if that doesn’t push your button, than surely the sweaty and buck nakedly brilliant blues rock of “Willie The Pimp” and “The Gumbo Variations” must. I’ve spent some two-cent words and a coupla ten-dollar ones trying to sell folks on Frank Zappa’s music, but Hot Rats sells itself. If no other work from Zappa should survive (and somewhere in a conservative cabal sick with the smell of cigars, the possibility is probably being discussed right now), Hot Rats alone would keep the flame alive through the ages. The composition, the arrangements, the musicianship, the sheer entertainment of it all is initially too much to comprehend, but in time it sinks in, and gestates, and first it’s a little blue crocus, and then a white one, and a pink one, and before you know it you’re trading bootlegs with some guy in Holland who says you have to hear this killer version of “Valarie” with an alternate ending (or something like that).

Stepping back from myself a bit, I’m sure that jazz/classical hybrids like “Little Umbrellas” could trace themselves back to Duke Ellington or some other modern composer without a trail of bread crumbs, but I don’t listen to a lot of that stuff, so for me Zappa’s the gateway to this new musical world. And, honestly, your grandchildren will probably be asking you stuff like “Ew, how could you have had a crush on Britney Spears?,” so I wouldn’t worry too much about the Zappa shakedown from future generations. But if they do ask you about Zappa, start putting money away in a trust fund so they can go to Yale and eventually become president. I’d like to hear “Brown Shoes Don’t Make It” played at least once at an inaugural ball in my lifetime, and I don’t see any other way to do it.

All compositions & arrangements by Frank Zappa.

Cover design by Cal Schenkel. Interior design by John Williams. The woman on the front cover is Christine Frka, a/k/a Miss Christine from The GTOs.