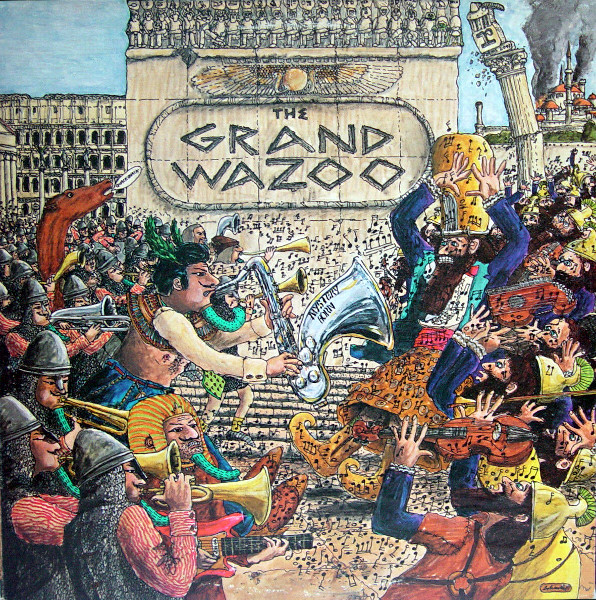 Don’t like classical jazz/rock music? Blow it out your Wazoo.

The last of the great instrumental burlesques, at least until Orchestral Favorites surfaced in 1979. The Grand Wazoo was recorded during Frank Zappa’s recovery from injuries sustained following an on-stage assault (so much for soothing the savage breast), thus entering into the top of two rather select musical subgroups: the recovery recordings (besting both Eno’s Discreet Music and Dylan’s The Basement Tapes, to name two) and program music dealing with the clash of different musical cultures (progeny of the classic cartoon, Music Land, that includes Patrick Moraz’ eponymous effort and The Residents’ Tune of Two Cities).

Drawing musical dialogue from the classical and rock cousins of the jazz family, The Mothers make the sort of music that’ll just curl the toes of anyone who enjoyed the mock-classical adventures of Waka/Jawaka, Weasels and Burnt Weeny Sandwich. Zappa has proved adept at writing program music (Joe’s Garage, Thing-Fish), though The Grand Wazoo differs in its instrumental approach; only the opening “For Calvin (And His Next Two Hitch-Hikers)” features vocals, and it’s not empty praise to point out this might be the most perfect amalgam of vocal and instrumental music in all of Zappadom.

The natural and seemingly effortless melange of instruments inhabits a unique world where rock, jazz and orchestral sounds meet in the middle of a saucepan and dance to the hot whims of the master composer in convalescence. Yet Zappa is careful to make sure that each of the songs retains a distinct flavor, from the seamy tones of “The Grand Wazoo” to the comic “Cletus Awreetus-Awrightus” to the epic riff that underpins “Eat That Question” (one I’d put on a pedestal with the closing theme to Gentle Giant’s “Three Friends”). Anyway, I could go on for pages—I’m that enthusiastic about this album. If I had to pick a favorite from Frank Zappa, it’d be down to this and Hot Rats.

All selections written by Frank Zappa.