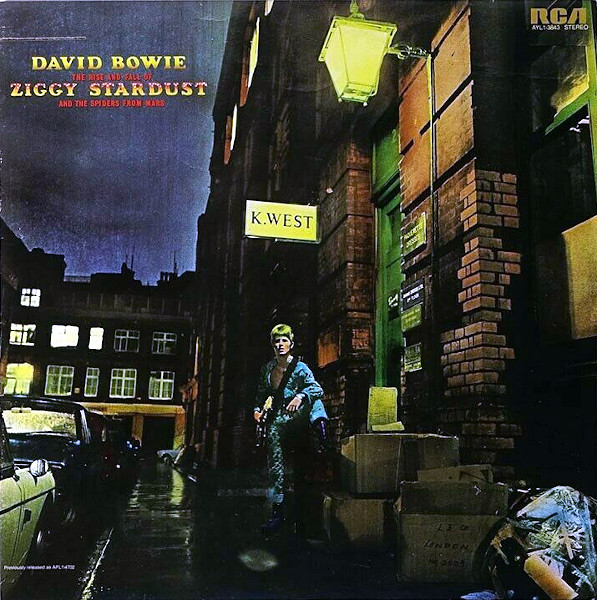 Bowie creates and destroys one of the most beloved rock icons of the 20th century in under an hour.

Kronomyth 5.0: Just turn on with me and you’re not alone.

The disenfranchised desperate for some sort of emotional connection that transcended the mundane, the starchildren assembled by a vagrant prophet named Bolan who were waiting for direction, the dreamers tired of terrestrial rock and hungry for an artist who understood how much the music really meant to them… they listened to Ziggy, and they weren’t alone anymore. This is rock played for life-or-death stakes, an alter ego lived at maximum volume who eventually threatened to usurp its own creator.

Though I’ve read that Ziggy wasn’t conceived as a concept album from beginning to end, immersion in Ziggy’s world is inescapable, his persona so strong that everything gravitates around him. “Five Years” and “Soul Love” set the stage for this strange new world: time is fleeting, chaos rules, love is reckless and all powerful. In these circumstances, the wild “Moonage Daydream” makes perfect sense.

If some saw this as a hell on earth, it was heaven to many (myself included): reason was discarded, excess ruled the day, rock and roll aligned with the stars. It was in these circumstances only that the ultimate rock star could be conceived: Ziggy Stardust. The dream is already over when “Lady Stardust” begins, but for our edification a tired Spider recalls the beginning of the greatest show on earth. Sympathetic, beautifully tragic, “Lady Stardust” might be the crown jewel of the whole album.

The cobwebs of recollection are swept, and we’re transported to the hungry young artist on stage, “Star” musing what might lie beyond the hill. “Hang On To Yourself” is another blur, Ziggy rushing to meet his destiny. The real mythmaking takes place on “Ziggy Stardust,” perhaps a composite of Bolan, Iggy Pop and David Bowie, but ultimately a demigod who didn’t exist (and yet has always existed as an archetype in the collective conscious). “Suffragette City” suggests disintegration, and the record closes with Bowie’s sermon to the lost sheep, “Rock ‘N’ Roll Suicide.”

Again, Ziggy has never held up to close scrutiny as a concept album (it simply wasn’t designed that way), but as a self-standing musical universe it is beyond compare. Aladdin Sane and Diamond Dogs would take place in parallel dimensions, but no Bowie album loses itself so magnificently in the music as The Rise and Fall of Ziggy Stardust does. The cord to reality cut, Bowie dangles dangerously between life and death for our benefit, and the result is one of the most uncompromising and wonderfully alien rock albums in history.

All songs written by David Bowie unless noted.