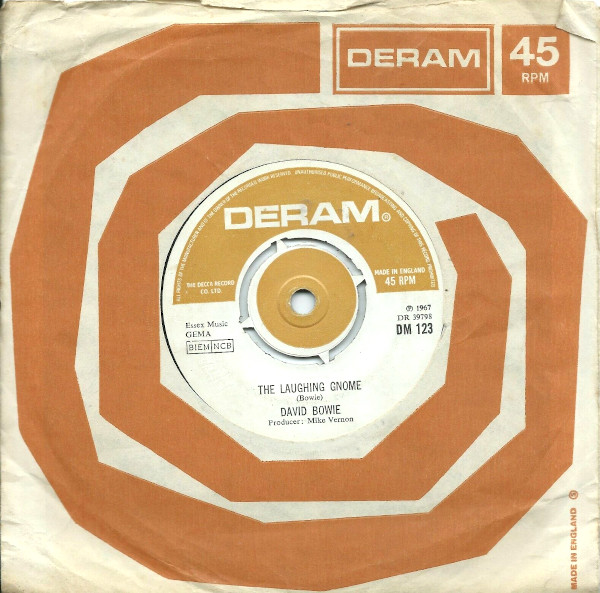 Headlong in my early infatuation with David Bowie (Heroes, Low, Stage, Lodger), I stumbled upon this song as part of an early Bowie compilation called Starting Point. I was immediately reminded of the precious, precocious music of Genesis in their youth. I might have also made the connection to early Tyrannosaurus Rex if I had been more familiar with it. It’s a quaint little tune, unquestionably clever, but a novelty song through and through, the novelty of which didn’t strike listeners until the song was re-released in 1973 and became a top 10 UK hit.

Before you read any further, I should remind you that all things Bowie begin and end at Pushing Ahead of the Dame. Mr. O’Leary’s short essay on The Laughing Gnome is far better than anything you’ll get from me today. Anyway, back to our humble little island. “The Laughing Gnome” is notable for its gnomerous puns, some of which are quite good, and the sped-up vocals a la Alvin and the Chipmunks. Yet behind the novelty is a solid beat that both reminds me of “Gimme Some Lovin’” and, when slowed down, sort of foreshadows “All The Madmen” (although maybe I’m seeing things in the shadows that don’t exist).

The flip side is arguably the stranger track, The Gospel According to Tony Day. Bowie seems absolutely bored singing it, presumably by design, as he dryly catalogs people and their personal preambles. The man who wrote the spritely gnome had to be aware that this song drags like heavy chains; its dark mood is almost Brechtian. When Bowie says “your mind, blow it” right before a bassoon solo, it’s either the strangest or the funniest thing he’s ever done.

“The Laughing Gnome” was widely panned on its initial release, but Bowie got the last laugh when the single was re-released in 1973 and became an international Top 10 hit. (Okay, it only reached the top 10 in the UK and Denmark, but still.) It’s still not one of my favorites by a long shot, but time has at least rescued it from the talons of ignominy.