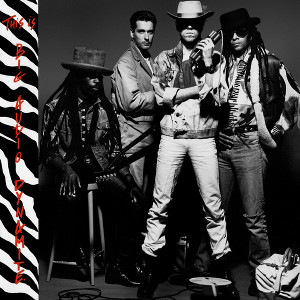 Given enough rope, Mick Jones blows up any chances of a Clash reunion with a punk multimedia remix/reboot dubbed Big Audio Dynamite.

Kronomyth 1.0: LETTS IT BE. I never knew what to make of This Is Big Audio Dynamite. Was this the new revolution? Had I missed the email saying that multimedia, sleepy melodies and drum machines were now the bomb? It turned out that it took me years to let go of my golden punk dreams for the second chapter of The Clash, and a few years more to appreciate the music of BAD for what it is and what it’s not. Today, I enjoy songs like “E=MC2,” “Medicine Show” and “Sony” on some level, the same way I enjoy “Lost In The Supermarket.” Mick Jones was never much of a singer; he’d put you to sleep over an entire album. And so BAD throws constant movie dialogue into the mix as a sort of stimulant. Still, a lot of this flew right over my head at the time. I mean, punk music and film history seemed like a really strange marriage at the time (it still does). The band was visually impressive, which owed a lot to the influence of clothier/cinematographer Letts. In fact, you could argue that BAD was one of the first bands to understand that music was now a largely visual medium. But I’d trade it all for another “Train In Vain,” honestly. The album does have some of its precedent in the dub experiments of The Clash (e.g., “A Party”), in case you’re lamenting the lost days of “The Magnificent Dance.” Unexpected? Totally. Underappreciated? Maybe. I can’t be right about everything all the time (tic).

All songs written by Mick Jones/Don Letts unless noted.

The Pictures
Photos by Dan Donovan.