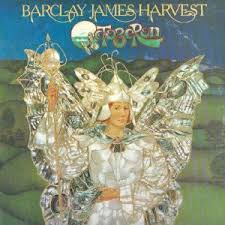 As others have pointed out, the album’s title is a clever amalgam of Oberon (the fairy king from Shakespeare’s A Midsummer’s Night Dream), octo- (meaning eighth, this being the band’s 8th album) and the month of October (when this album was released). It is a dreamy and melancholy record, reminiscent of Pink Floyd (DSOTM), Alan Parsons Project and 10cc at times, yet uniquely the product of Barclay James Harvest. While it may not be the quintessential BJH album, the very essence of BJH is what drives it. There are the lush and gentle songs from Les Holroyd, the quirkier and edgier songs from John Lees and the obligatory opus from Woolly. It’s a mystery to me why Time Honoured Ghosts and Octoberon achieve such different ends, except to note that Ghosts sounded like BJH being fit into a mold, while Octoberon is molded around BJH’s strengths. At first, I was underwhelmed by Octoberon. Where was the electrifying opener? But over time, “The World Goes On” wove its spell. Les’ plaintive voice, Mel’s stunningly simple drums and the orchestral embrace in midway are familiar friends that lead us on a different, sadder, but also wiser journey. Lees’ “May Day” builds the momentum with a mind-provoking track that recalls David Bowie’s “All The Madmen” a little bit, but again is clearly a BJH song in spirit and execution, including a crowded choral ending. The first side closes with “Ra,” a return to one of Woolly’s favorite themes (the sun), with typically epic production. The second side of music features slightly shorter tracks, including two (relatively) radio-friendly numbers in “Rock ‘N’ Roll Star” and “Polk Street Rag,” which explore the disco and rock sides of BJH, respectively. Holroyd’s “Believe In Me” follows, one of the few tracks here that might have felt at home on Ghosts. None of the songs on the second side prepare you for the stunning, “Suicide?,” their sinister “Mandy” moment if you will. The suicide theme was treated before on “Paper Wings,” but this is a much darker treatment. The closing minutes, in which footsteps cover the preceding lyrical terrain, is literally breath-taking; I’d have to go back to Firesign Theatre’s Don’t Crush That Dwarf, Hand Me The Pliers to find an album whose closing moments shook me so. In some ways, Octoberon is BJH’s Going For The One: a clear sign that the old magic may have been hidden, but had never left.