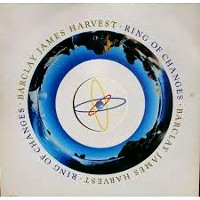 Turn of the Tide was a turn for the worse, as BJH ditched their guitars in favor of synthesizers and the soul-selling that such a move entails. If you’re looking for a guitar solo on Ring of Changes, you won’t find it. What you will find, from the very onset, is the kind of coiffed and atmospheric production usually reserved for tier A bands such as, well, The Moody Blues. I don’t like the comparisons either, but BJH openly invited them by inviting Pip Williams to produce this album. Ring of Changes begins with an orchestral flourish that might be their classiest moment since “Moonwater.” It quickly fades to reveal a lovely ballad from John Lees that sounds—how else to put this?—refreshed. As Lees later reveals in the magical story, “Paraiso Dos Cavalos,” he enjoyed an extended vacation in Portugal that seems to have revived his spirits. And a revival this is, in the sense that Lees returns to writing hopeful, heartfull songs about the past (“Fifties Child,” “Teenage Heart”) and the present (“Midnight Drug,” “Paraiso”). His creative counterpart, Les Holroyd, delivers songs about bad love, good love and life with the usual warm results. From what I’ve read, critics seem to lump this album in with their last, and I would make a point of separating them. Turn of the Tide sounded tired. Ring of Changes sounds recharged. Is it an outwardly better album than The Present? No, not really. But it is a better effort than their last and in line with where I would want them to be at this stage: trading in mellotron magic for studio wizardry while continuing to write personal and occasionally powerful songs.

Original LP Version
A1. Fifties Child (Lees)
A2. Looking From The Outside (Holroyd)
A3. Teenage Heart (Lees)
A4. High Wire (Holroyd)
A5. Midnight Drug (Lees)
B1. Waiting For The Right Time (Holroyd)
B2. Just A Day Away (Lees)
B3. Paraiso Dos Calavos (Lees)
B4. Ring of Changes (Holroyd)