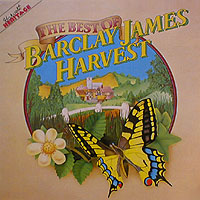 This is opportunism, plain and simple. As BJH began to sell more records, Harvest (the label) decided to get in on the delayed action with a compilation of their first four albums and sundry singles. The Best of Barclay James Harvest is a misleading title; The Best of Barclay James Harvest on Harvest would have been more accurate (presuming Jeffrey Hammond-Hammond didn’t object). It is a generous compilation and makes a decent effort at harvesting their best tracks, although the label clearly seems to have reserved some choice cuts for Volume 2. Few would argue that “Mocking Bird,” “Galadriel,” “Brother Thrush” and “Medicine Man” are high points in the band’s early catalog. “Ursula” and “Moonwater” are personal favorites as well, although perhaps not held in such universal high regard by each BJH fan. Had the label’s intent been to collect the band’s best music on a single album, the remaining tracks would have been excised in favor of songs like “Early Morning,” “Vanessa Simmons” and “Taking Some Time On.” As consolation for not quite getting the “best” of BJH, you do get a handful of non-album tracks, including both sides of two singles: “Brother Thrush/Poor Wages” and “Rock and Roll Woman/The Joker.” “Child of Man,” originally released as the B side to “I’m Over You,” is also included here. The sum effect of The Best of BJH isn’t so much different than the earlier compilation, Early Morning Onwards (although the overlap is minimal). Harvest would eventually release four albums’ worth of compilations from the original four BJH releases in their catalog, which you could see as grift or thrift. Thus, this isn’t the first, second or third BJH compilation you need to buy, but at least you don’t lack for choices.