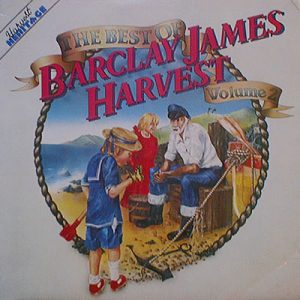 This actually does a better job of distilling the band’s best early material than the first volume, although neither was trying too hard. Harvest clearly had a second volume in mind when they released the first, and underplayed their hand as a result. If one were to contain the best of BJH to a single disc out of a richness of magnanimity, it would have to include at least half of these tracks, four from their first and (maybe) two from the third volume. To my mind, it would play out like this: early morning, brother thrush, taking some time on, the sun will never shine, she said, galadriel, mocking bird, vanessa simmons, medicine man, ursula, after the day* and crazy (over you) (*summer soldier or moonwater would also work). Like the previous volume, this does collect some hard-to-find singles including both sides of the pseudonymous Bombadil single, “Breathless” b/w “When The City Sleeps,” the taut, single version of “Medicine Man” (which I prefer to the original mix) and the flip side of their first single, “Mr. Sunshine.” I have to say that, in a career marked by some truly hideous album covers, this is one of the more hideouser, featuring a creepy illustration with no earthly connection to BJH other than what appears to be a hastily added butterfly on the boy’s wrist. Really, Harvest just should have released these with a sticker that read “Repackaged—now with palpable animus!”