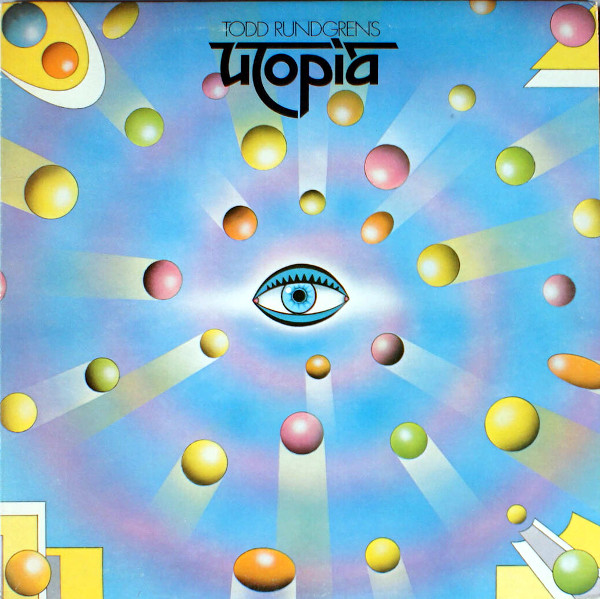 The rock ikon throws one of his many hats into the progressive rock ring, with mixed results.

Kronomyth 1.0: The way to heaven out of all places is of like length and distance.

Todd Rundgren and Frank Zappa, despite their obvious differences, were two artists that I always associated together. They were both prolific geniuses with a soft spot for early rock & roll, so maybe that was the connection. Todd Rundgren’s Utopia is where their musical worlds most intersect. After a pair of albums that found Rundgren writing confoundingly short songs, he went in the opposite direction, forming a progressive rock band and recording fifteen- and thirty-minute songs.

I don’t need to tell you that Rundgren is no match for Zappa as a guitarist, but what he does bring to the party are three keyboardists and the sort of psychedelic innocence you would expect from a flower child like Rundgren. (Zappa, for the most part, was a human cactus.) Not surprisingly, the shortest song on Todd Rundgren’s Utopia is also the tightest, “Freedom Fighters.” The long tracks have their moments, to be sure, but aren’t as tightly constructed as Zappa’s music. “The Ikon” isn’t even halfway over before it breaks down into an endless array of solos.

In describing the music of Todd Rundgren’s Utopia, I would point you to a cross between Zappa and The Tubes (who hadn’t officially arrived yet), without the sharp sense of humor. There are what would likely have constituted regular Rundgren songs encased in the extended pieces (e.g., about two-thirds into “The Ikon”), and the experiment isn’t a complete one-eighty for Rundgren’s fans, since experimentation was expected at this point. As a prog album, however, I’m not entirely sure that some of this isn’t tongue in cheek. At least, it feels like Rundgren is consciously trying to make a prog-rock album much of the time, as opposed to a natural outflow of his creative expression. Everything that Rundgren does is interesting, and Todd Rundgren’s Utopia is certainly no exception, but this wouldn’t make my top 200 list of prog albums and, honestly, I’m not sure any of the Utopia albums would.

In an earlier review of this record, I assumed that M. Frog Labat was a nomme de plume for Roger Powell. Wrong. Mr. Geoffrey Feldman kindly set me straight, and I include his comments here for our mutual edification:

“M. Frog Labat was Jean Yves Labat; Powell joined the group with the next album. I worked with both men and they are extremely different people and very different as artists. I think this will also be evident if you listened to that first Utopia album and then to the rest. Labat had a much wilder style then.

Labat used the Synthi AKS by EMS of England and Powell used Arp synthesizers by Arp instruments. The large console of synth equipment in the back album picture was Synthi units integrated into a custom frame. I built that while employed by EMS of America. The Voltage controlled filters of devices in the day gave them a distinctive character and you can hear the differences too. The Synthi line were also used extensively by Pink Floyd.”