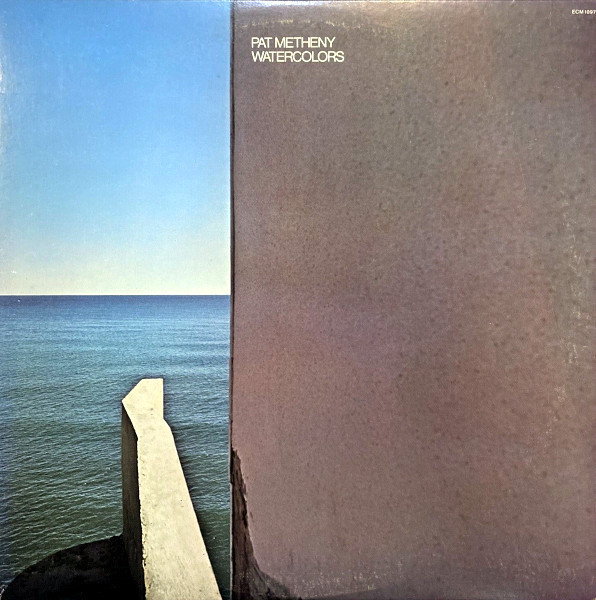 A water-themed album on which the new Pat Metheny Group increases its liquid assets.

ECM’s grooming of their young guitar prodigy continued with Watercolors, a collection of songs whose common theme is the water. Though recorded in Oslo, Norway in February, the music largely retains the American warmth and congeniality Pat Metheny is known for. Because water is a widely mutable form (ah, the Wonder Twins taught us something after all), Watercolors presents a variety of temperatures and textures. One moment, the listener is splashing in a warm bath of sound (Watercolors), only to emerge into a world of ice crystals (Icefire).

The “colder” songs often feature Metheny alone or with accompaniment from pianist Lyle Mays. The pairing here marks the beginning of a fruitful relationship (the one has literally become synonymous with the other), and hearing the chemistry that occurs on Sea Song illuminates the musical sympathy they have for one another. The remainder of the group consists of bassist Eberhard Weber (who, like Jaco Pastorius, proved a temporary hire) and drummer Dan Gottlieb (who remained with Metheny into the ‘80s). They’re usually brought in to flesh out the smooth jazz melodies ever-ready to Metheny, creating life-affirming music that’s both technically accomplished and yet lyrical.

The technical component of Metheny’s playing is worth talking about: he alternates between liquid guitar lines that cross over into pop (River Quay), complex multistring clusters of notes (Oasis) and 6/12-string shooting of remarkable fluidity (The Florida Greeting Song). And yet, with all that to recommend it, Watercolors isn’t the first place to dip your toes into the world of Pat Metheny. Though fully enjoyable as an album of music, Metheny is still finding his voice on Watercolors (he’d only just turned 21), and his focus at this stage is on songwriting, technique and execution. Here, the new discoveries are old discoveries: riding on the gently rolling seas of John Coltrane, skimming along the surface like Jim Hall. It’s still a fine record, likely to awake the mind’s eye at various moments, but greater treasures lay farther up the shore.

All selections composed by Pat Metheny.