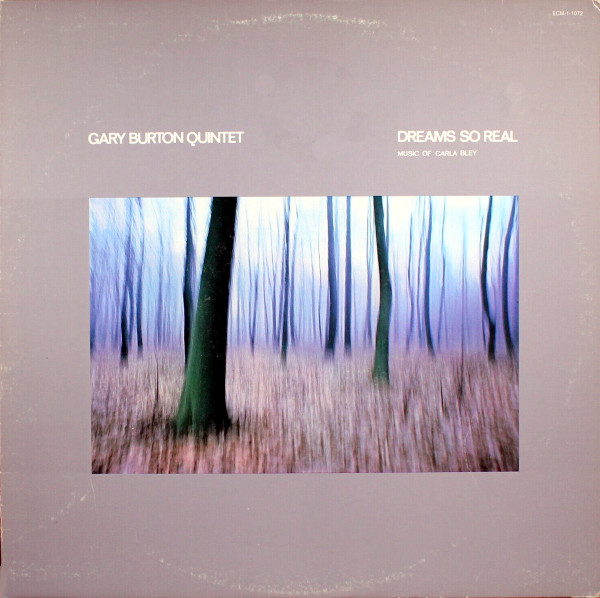 Kronomyth 26.0: Speak with a silver tong.

The ECM albums are all of them ghosts, moving through the midwinter chill of Ludwigsburg, baronial and ethereal. This, the seventh since signing with the label in 1973, marks a slowing down of Gary Burton’s breakneck recording pace. From here on, he would record only one new work a year. Like Tong Funeral before it and, more recently, “Vashkar” from Hotel Hello, Dreams So Real features the compositions of Carla Bley. Unlike the morbid, wordless opera of Tong, Dreams So Real is thoughtful, with a warm Latin current woven into the chill air, occasionally spiky but always smart.

Dreams is otherwise notable for introducing a young guitarist by the name of Pat Metheny. Metheny and Mick Goodrick play 12-string and 6-string electric, respectively, giving the music a subtle but complex dual-guitar dimension underneath Burton’s mellifluous and piquant vibraphonery. Metheny already possesses his distinctively flanged sound, Goodrick is more articulated and agitated; you can hear their two styles side by side (sort of) in the solos from “Ictus” (Metheny) and “Syndrome” (Goodrick).

Despite two guitarists, the session isn’t an axefest by any means. In fact, the real star doesn’t play a single note. Carla Bley’s compositions shine in this setting, moving with liquid grace in the title track and the surprisingly sentimental “Vox Humana.” A solo performance from Burton on “Jesus Maria” also provides a unique window into the elusive beauty of Bley’s compositions. Burton watchers will recognize the longstanding rhythm section of Bob Moses and Steve Swallow; the sere brushstrokes of Moses on the opening track are an inspired touch. Metheny fans may be disappointed to find their hero in an understated role here, but lovers of Burton and Bley will find much to linger over on Dreams So Real.

All compositions by Carla Bley.

* Track listed as “Ictus/Syndrome” on the CD re-issue.