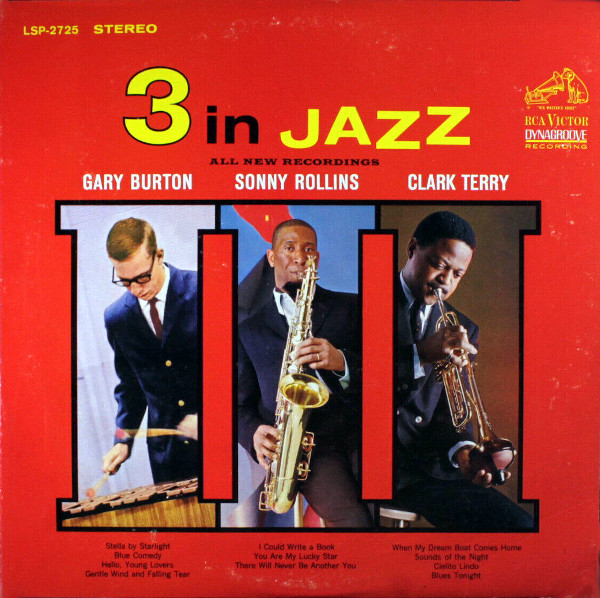 A multi-artist sampler featuring a few songs each from Sonny Rollins, Clark Terry and a young Gary Burton.

Kronomyth 3.0: Three is a magic number.

They don’t make ‘em like this anymore: three sessions from three artists recorded in the waning days of winter62/3. It reminds me of those old baseball rookie cards, where you would find three players (two of them familiar) side by side, each name pregnant with promise. Of course, at this stage Clark Terry and Sonny Rollins were known quantities and a just-turned-twenty Gary Burton the lone rookie.

Although Terry and Rollins had played together five years before on Sonny Rollins and The Big Brass, the two are worlds apart stylistically. The Ellington-schooled Terry is ballroom born and bred, joined by guitarist Kenny Burrell in a quintet/sextet setting that plays it straight and cool, from swing (“Blues Tonight”) to bossa nova (“When My Dreamboat Comes Home”). The four from Burton are also well-mannered numbers, including a pair of fresh originals from Burton (“Gentle Wind And Falling Tear”) and fellow Berklee alum Michael Gibbs (“Blue Comedy”), who later became the musical director for the BBC TV show, The Goodies (goody goody yum yum). It’s up to Sonny Rollins and trumpeter Don Cherry to stir things up with bold interpretations of “You Are My Lucky Star” and “I Could Write A Book” (their take on “There Will Never Be Another You” is more restrained).

3 In Jazz is a mixed bag and that was the original idea: to mix things up, maybe expose Rollins fans to Burton or Burton fans to Terry (as was the case with me). It’s obviously not the first album you need to hear from any of these artists, but if you’re looking for a reason to add it to your collection I can think of three.