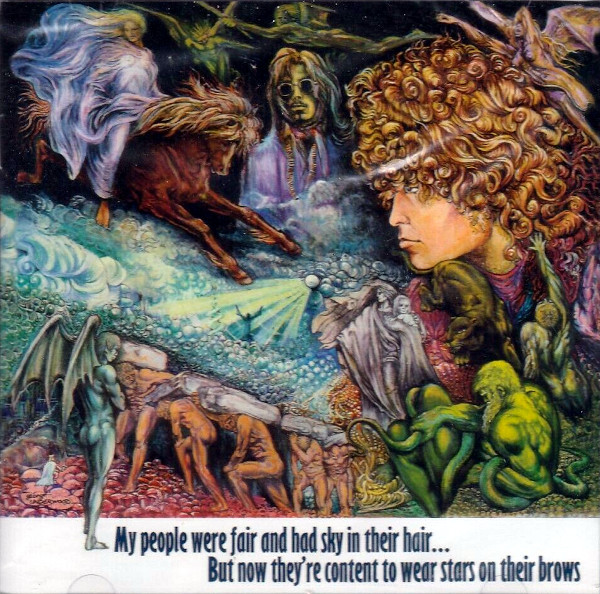 “You’ll get used to it in time,” said the Caterpillar. I was horrified when I first heard this album. It didn’t sound anything like “Metal Guru” or “Jeepster.” Instead, it sounded as if some pixillated Pan who had subsisted entirely on the works of Lewis Carroll and Kenneth Grahame and his bongo-playing friend had smoked a lot of dope and accidentally wandered into a recording studio. Which, as it turns out, isn’t that far from the truth (Bolan was naturally psychedelic, but Took was known to toke).

“To me the first album always sounded horrible. We were victims of a low budget and we didn’t know what we were doing. It was very thin sounding and didn’t represent the fullness of that amazing duo. It was literally recorded in two, maybe three days, and on the fourth day we mixed the entire album.” – Tony Visconti, in a 2015 interview.

Now, as I said, that was my first impression. Over repeated listenings, My People Were Fair… spins its simple spell of fantastic faces and places with a modicum of chords, thumps and Bolan’s immediately identifiable, trilling voice. Although willfully childish in spots, the songs point to the great things to come, particularly when Bolan opts for a slightly more serious vibe (e.g., “Chateau In Virginia Waters,” “Afghan Woman,” “Graceful Fat Sheba,” “Frowning Atahuallpa”). “Weilder of Words” (yes, I know, just wait until you hear him butcher Dvorak) is also a notable mention as it captures the joyous feel of vintage T. Rex. As for the contributions of Steve Peregrine Took, well, he took more than he gave, although you’ll be thankful that it isn’t just Marc Bolan and two chords for forty minutes.

Despite the fact that this is the formal debut of Tyrannosaurus Rex, it feels more like a demo recording, and approaching it that way is likely to cause less frustration/disappointment. It is, if nothing else, an important and authentic relic from the psychedelic underground. In an age when everyone was jumping on the psychedelic bandwagon, Tyrannosaurus Rex were the original hippie gypsies.

A1. Hot Rod Mama
A2. Scenescof
A3. Child Star
A4. Strange Orchestras
A5. Chateau In Virginia Waters
A6. Dwarfish Trumpet Blues
B1. Mustang Ford
B2. Afghan Woman
B3. Knight
B4. Graceful Fat Sheba
B5. Weilder of Words
B6. Frowning Atahuallpa

All songs written by Marc Bolan.