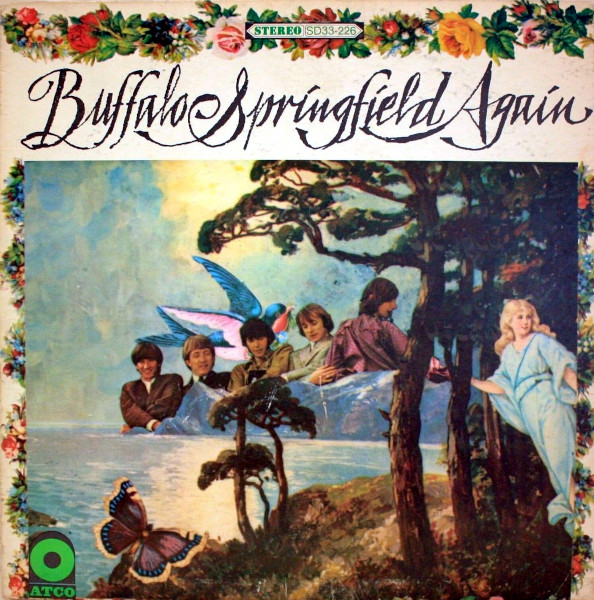 Remember when David Crosby started writing songs in The Byrds? It’s like that, only better.

Kronomyth 2.0: Expected to fly with The Byrds.

Between 1966 and 1969, rock and roll progressed at a remarkable rate. Everyone was listening to everyone else, studios had become experimental laboratories of sound and musicians pushed their own creative limits with complex song structures. Buffalo Springfield Again is a kind of miniature portrait of that progression. Although billed under the Buffalo Springfield brand, the album is really a collection of solo songs recorded with and without the band. If the band were breaking apart (and they were), they were doing it while individually advancing at breakneck speed.

The material from Neil Young (“Mr. Soul,” “Expecting To Fly,” “Broken Arrow”) represents some of the most ambitious rock/pop of its day. Stills’ songs are also uniformly excellent, anticipating the heavenly harmonies to come with CS&N on “Rock & Roll Woman” and showing some sophisticated pop sensibilities on “Bluebird” and “Everydays.” Furay also appears as a creative force on the record, contributing to the early country/rock canon with “A Child’s Claim To Fame” and “Sad Memory” while adding a completely unexpected soul workout, “Good Time Boy,” featuring drummer Dewey Martin on vocals. The album is really a brilliant patchwork of different pieces; no two tracks have the same lineup or producer.

The album’s back cover acknowledges an eclectic set of influences, from Gene Pitney to Frank Zappa, which is borne out in the music on Buffalo Springfield Again. But it’s The Beatles (not mentioned save for lovable Ringo) and The Byrds who set the late 60s sonic revolution in motion by laboring longly over their songs in the studio. Prior to that, rock records (like jazz) were recorded in a few days. After The Beatles, musicians began to see each song as an opportunity to “say” something, and didn’t want to appear dull by repeating themselves. And Buffalo Springfield Again is definitely not dull. It is, rather, a quantum leap forward from their last album and the source of probably 80% of the Buffalo Springfield’s most enduring music.

Buffalo Springfield Again is frequently cited as one of the greatest rock records ever made. Rolling Stone named it #188 on their 500 greatest albums of all time, and Robert Dimery included it in his book, 1001 Albums You Must Hear Before You Die (which, unfortunately, wasn’t included in Peter Boxall’s 1001 Books You Must Read Before You Die, presenting consumers with a catch-22, which did make the list, and if you get the sense that I’m poking fun at these lists, then you can safely forgo the 1001 Things That You Need Other People To Tell You Because You’re Too Stupid To Figure It Out For Yourself list, or at least cross “detect sarcasm” off that list.)