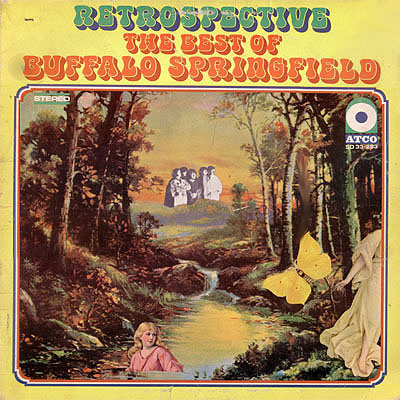 A compilation of America’s answer to Cream, in the sense that they curdled quickly and went their own wheys.

The American psychedelic scene of the late ‘60s produced some really strange birds, few stranger than Buffalo Springfield. Though the group only released three albums, people have pored over that trilogy and drawn from it a rich musical legacy. (You’d have to look across the pond at Cream and Traffic to find the same phenomenon.) A lot of that legacy belongs to Neil Young, whose restless creativity and fierce independence transformed the Buffalo from just another smart folk/rock band into something bigger. Without his acid electric guitar and solo experiments, Buffalo Springfield might have been merely a precursor to Poco and CS&N. But with Young there was no telling where Buffalo might roam: miniature epics (“Broken Arrow”), icy innocence (“I Am A Child”), Motown (“On The Way Home”), Phil Spector (“Expecting To Fly”) or heavy psychedelic R&B (“Mr.Soul”).

In between these minefield masterpieces are strewn the contributions from Stephen Stills and (occasionally) Richie Furay. There’s no denying that Stills and Young feed off one another; you hear that on “Bluebird” and “Rock And Roll Woman.” But the three of them are coming from very different places and, rather than meet in the middle, tend to stay in their own camps. Cream, Traffic, even The Beatles arranged their songs so that each was identifiable as the work of that band. By contrast, it’s hard to believe today that “For What It’s Worth,” “Kind Woman” and “Mr.Soul” are the work of the same band. What you hear in the music of Buffalo Springfield is the sound of three separate songwriters growing together in isolation. Retrospective marked the fork in the road where the trio diverged and where fans return to commemorate a serendipitous alignment of talent.