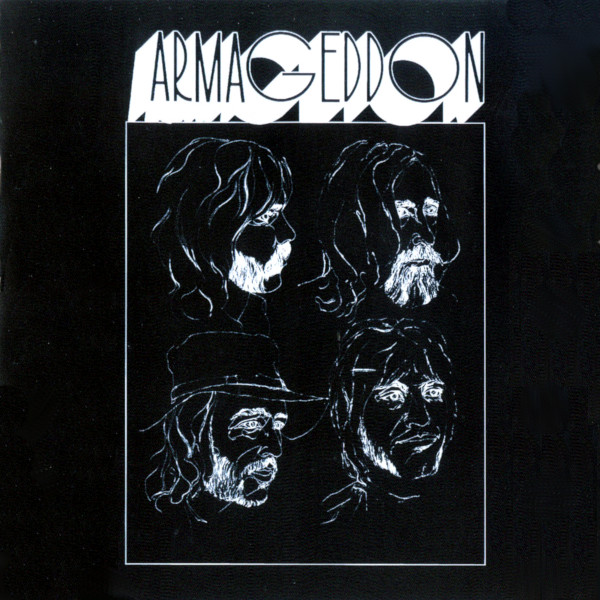 [Kronomyth 1.0]
Bibbidi-Bobbidi Bilbo Baggins and the End of the World.

The core players of The Kitchen Cinq re-assembled as Armageddon and released one eponymous album for Jimmy Bowen’s Amos Records. Armageddon is your standard California psychedelic folk/blues rock by way of Texas, which is to say a twangier country cousin to The Byrds and Buffalo Springfield. (Future Byrds bassist Skip Battin appears to have joined the band briefly.) I don’t like country music, and mixing it with psychedelic rock is, in my opinion, akin to mixing chocolate with broccoli. Also, albums like these underscore the problem with psychedelic elevation: being stoned can make great music sound brilliant, but it doesn’t help you make great music. In fact, the opposite usually happens. If you don’t believe me, I would offer Armageddon’s version of “The Magic Song” or “Another Part of Our Life” as exhibits A and B in the case for why your stoned music sounds stupid to everyone else. I had a similar reaction to Mount Rushmore’s first album, and there’s an obvious pattern at work: kick out some electric jams with lukewarm-to-hot lead guitar, add lyrics featuring portentous statements about the future, cover it in a “shucks, we’re just some good old boys having a good time” sauce and top it all off with a tepid cover of a great song (in this case, “Tales of Brave Ulysses”). Sometimes, of course, the pattern yields some interesting works of semi-art (so does a kaleidoscope), as happens on “Cave of the Winds” and “Bilbo Baggins.” Really, any song about Bilbo Baggins would pique my interest, even if it were played with kazoos (and maybe even moreso). In 2005, Armageddon was released on compact disc in Belgium, that storied land of chocolate and child trafficking. Should you decide to spend $15 on this or the original elpee, well, it wouldn’t be the end of the world, just an unbecoming end for Alexander Hamilton and Abraham Lincoln.