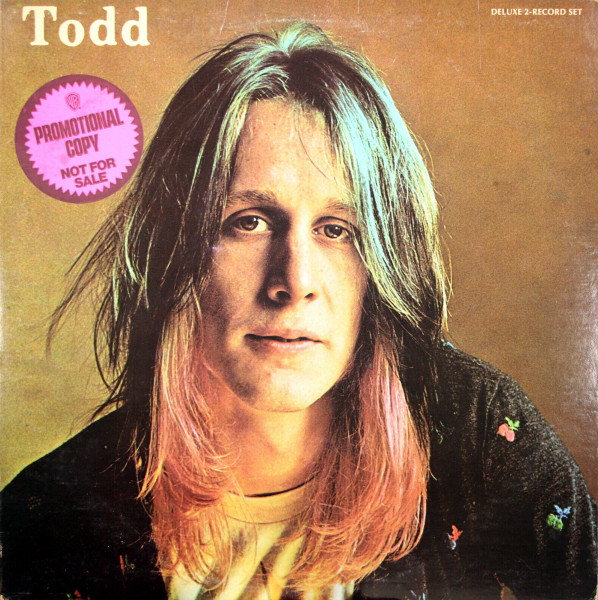 There’s nothing, absolutely nothing, half so much worth doing as messing about in notes.

As smart as it was, AWATS was a difficult album. Todd confirms the suspicion that Todd Rundgren was becoming a difficult artist. Released as a double elpee, this might have easily been winnowed down to a single record. That would have meant filtering out the synthesizer noodling and Gilbert and Sullivan songs, however, and Todd clearly had no interest in doing that. In fact, I’m not sure he wouldn’t have just as likely cut out the ballads at this point.

Todd is important for several reasons: it marks his deepest foray yet into synthesizers, a move that would manfiest itself more in Utopia and later albums like Healing; it contains a few minor classics in the Rundgren canon, including “A Dream Goes On Forever,” “I Think You Know,” “Izzat Love” and “Don’t You Ever Learn;” and it’s over an hour’s worth of music from an unquestionable musical genius. All of that said, Todd is his own worst enemy sometimes. Just when you think “Izzat Love” is a hit record in the making, he speeds up the sound to create distortion. On “Everybody’s Going To Heaven” and “Heavy Metal Kids,” Todd teases by shifting into rock & roll overdrive, only to suddenly downshift into dark musings.

Something/Anything? was a revelation. Todd reveals that genius is a double-edged sword, and not for nothing does this double elpee remain sheathed in its sleeve on most days. On compact disc, you can safely skip over the stranger sections, but you’ll still end up short of an elpee’s worth of songs. In an interesting turn of events (to be filed under “Time Heals,” perhaps), Todd performed this entire album live in 2010, suggesting that audiences have found something in Todd to champion that I may have missed.

All songs written and arranged by Todd Rundgren unless noted.