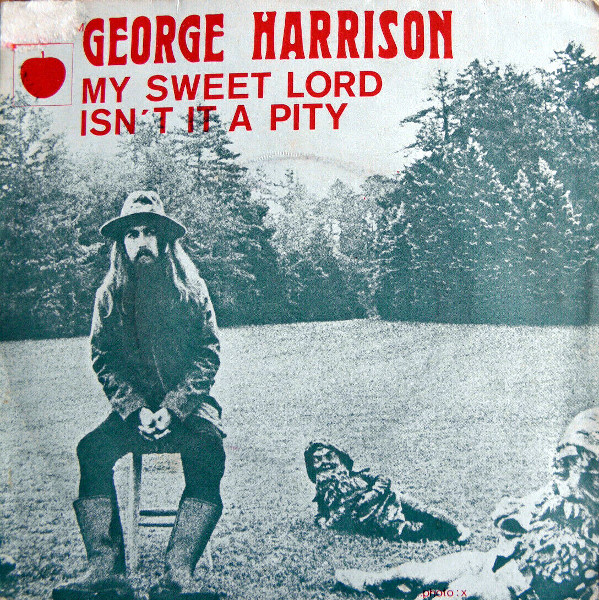 Okay, so it does sound like The Chiffon’s “He’s So Fine,” but I’m pretty sure there’s room in the world for both songs.

There’s a short, engaging article by Bill Demain on Performing Songwriter that covers the legal travails of George Harrison’s “My Sweet Lord,” which I would encourage you to read. I would discourage you from reading the comments after it, since The Beatles tend to attract trolls. The song itself is a complex paradox: an affirmation of God, accused of theft, that made its owner no money but remains his best-selling single. Sounds like the makings of a good riddle, doesn’t it?

Rolling Stone ranked it #454 in its 500 Greatest Songs of All Time, the only Harrison solo song to make their list (although “While My Guitar Gently Weeps” and “Something” appear much higher in the list). In the US, the B side was “Isn’t It A Pity” in its full seven-minute incarnation. As a boy, I bought this single and was turned off by “Isn’t It A Pity.” It seemed depressing and in sore need of editing. Thus, I waited years before buying All Things Must Pass for fear that the entire set would be more Pity-full than sweet. I was wrong, of course, but fearful of the investment that a triple-record set represented. In retrospect, I should have passed on Sentimental Journey and Beaucoups of Blues and pooled the money for ATMP instead. Thirty years later, George recorded a new version of “My Sweet Lord,” with the proceeds going to various charities.