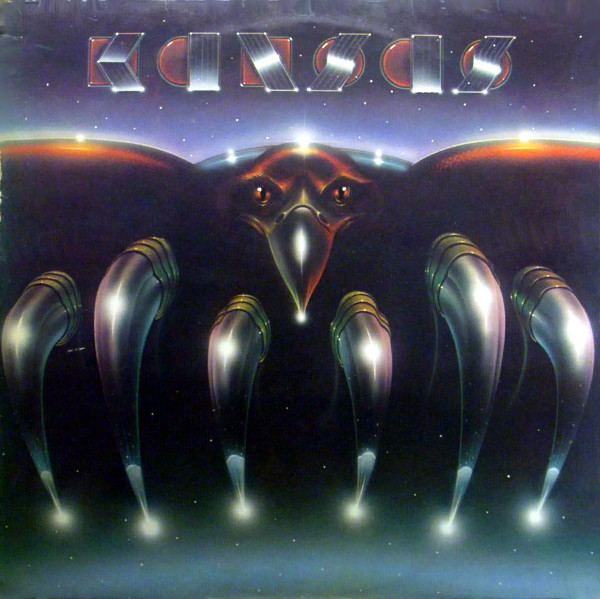 One foot in prog, another in hard rock, both kick butt on their second album.

The band’s sophomore album brought former bandmate Jeff Glixman back into the fold as producer, but otherwise retains the hard rock/anglophile prog mixture of their debut. Highlights this time include the title track (with its obvious nods to Genesis), “Lamplight Symphony” and “Incomudro – Hymn to the Atman,” prog pieces from Kerry Livgren that run about ten minutes each. Sandwiched in between are hard rock songs that again demonstrate the split personality of the band’s principal creative forces, Livgren and Steve Walsh.

In the best prog bands (Yes, Genesis, ELP, etc.), the player/pieces fit together perfectly. That’s never been the case with Kansas. The group seemed reluctant to place both feet into either the hard rock or prog rock camps, and it’s hard to tell where their loyalties lie, which is important for progressive rock, at least in my opinion. It’s the very reason that bands like Procol Harum will never be proper prog bands: because, in order to be one, you have to want to be one. Kerry Livgren clearly wanted Kansas to be a prog band, but he drags the rest of the group along only by the strength of his compositions.

A few random thoughts on Song for America follow. Phil Ehart shines on this recording and makes a solid case for including his name more often in a list of rock’s best drummers. Rob Steinhardt disappears for much of the record after taking the lead vocals on the opening “Down The Road.” The band’s firstly overtly Christian song, “The Devil Game,” comes surprisingly from Steve Walsh and not Kerry Livgren. The title track continues the band’s historical view of America as an unspoiled paradise and Livgren’s lyrics in general suggest the earlier American naturalists. Both “Incomudro – Hymn to the Atman” and “Lamplight Symphony” point to an afterlife, though not necessarily in the traditional Christian sense. I did warn you they were random thoughts.

In figuring out where Song for America fits in the kanon of Kansas, I keep returning to Rush. In some ways, this is their Fly By Night, with the caveat that the first Kansas record was more self-assured than Rush! Joined by a sympathetic producer in Glixman, Kansas would soon find their own voice, much as Styx was doing slightly north of them. Many regard this as classic Kansas, and I’d agree with that assessment about half the time. The title track is classic progressive rock, the rest is rarely less than exciting, though none of it reaches the consistently sublime heights of the English masters.

All musical arrangements by KANSAS.