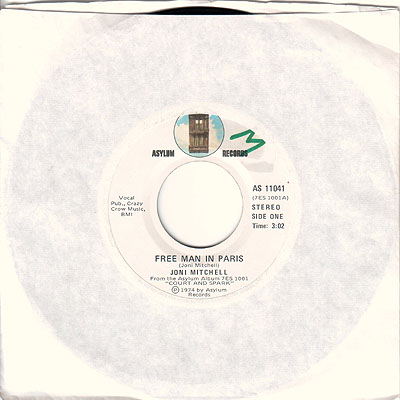 A good artist is like a camera with a special filter. As Joni Mitchell became widely popular, her lens took in wider circles, graduating from self-portraits to portraits of famous people. The scale of the music also grew, framing the excessive objects that appeared in her new field of vision.

“Free Man In Paris” is a portrait of David Geffen, Joni’s former agent and then an executive with Asylum Records. Joni the artist does a neat thing here by letting the subject speak for himself, taking herself out of the picture in one sense while carefully staging everything we see. The B side is a self-portrait in a mirror at a big party, Mitchell an island in a sea of people. Both tracks are identical to the elpee versions; generally speaking, Mitchell’s singles are an unrewarding avenue for collectors.

Based on songs like “Peoples Parties,” it would be interesting to speculate whether Joni has a touch (or more) of autism; the song certainly seems like an autistic’s impression of a party, at once apart from everyone and yet unable to disconnect from everything. While I’ll quickly concede that “Free Man In Paris” is a brilliant song, I’ve always found it impossible to sing (despite the frequent desire to do so). It’s one of Joni’s most elusive, enigmatic songs in that sense, and a sign of the jazzier explorations to come.