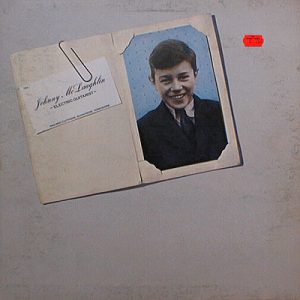 Not a McLaughlin matter worth overanalyzing, simply a septet of songs in various permutations. The idea here seems to be to show off the guitarist’s range, from Mahavishnu to Santavishnu to contentious energy-lord of the avant garde. Interesting but rarely arresting, Johnny McLaughlin, Electric Guitarist doesn’t belong at the top of John’s resume. I’ll concede that “Friendship” delivers where Love Devotion Surrender didn’t, finding middle ground between the styles of McLaughlin and Santana, and the dreamy “Every Tear From Every Eye” conjures butterflies. But the rest of the record is a little too loose and jammy, from the drum-guitar boxing match of “Phenomenon: Compulsion” to the aimless funk of “Are You The One? Are You The One?” While it covers a lot of ground, spectacular scenery is scarce. A Mahavishnu reunion of sorts (“New York On My Mind”) arrives at the same attainable height as Jean-Luc Ponty’s early also-rans, a session with Chick Corea and Stanley Clarke is standoffishly notey. McLaughlin’s tripping bursts of guitar notes are technically impressive, though he only generates warmth by turning off the fireworks display for “My Foolish Heart.” The track placement seems to suggest a predestined course, stripping away layers until the irreducible is left. If it’s not the guitar workshop some hoped for, drummers won’t be disappointed: Billy Cobham, Jack DeJohnette and Tony Williams are their usual awe-inspiring selves. Fine cameos from Patrice Rushen, Jerry Goodman and Jack Bruce further underscore the who’s who lineup on this all-star assembly. But great musicians don’t automatically equate to great music, at least not here. Perhaps he should have retitled this Johnny McLaughlin, Eclectic Guitarist.

All compositions by John McLaughlin unless noted.

The Players
John McLaughlin (guitar) with Jack Bruce (bass on B2), Stanley Clarke (acoustic bass on B1), Bill Cobham (drums on A1/B3), Chick Corea (piano and mini-moog on B1), Tom Coster (organ on A2), Jack DeJohnette (drums on B1), Stu Goldberg (electric piano, organ & mini-moog synthesizer on A1), Jerry Goodman (violon on A1), Neil Jason (bass on A2), Alphonso Johnson (Taurus bass pedals and bass on A3), Alyrio Lima (percussion on A2), Armando Peraza (congas on A2), Patrice Rushen (piano on A3), David Sanborn (alto sax on A3), Devadip Carlos Santana (guitar on A2), Fernando Saunders (bass on A1), Tony Smith (drums on A3), Narada Michael Walden (drums on A2), Tony Williams (drums on B2). Produced by John McLaighlin in association with Dennis Mackay; engineered by Dennis Mackay.