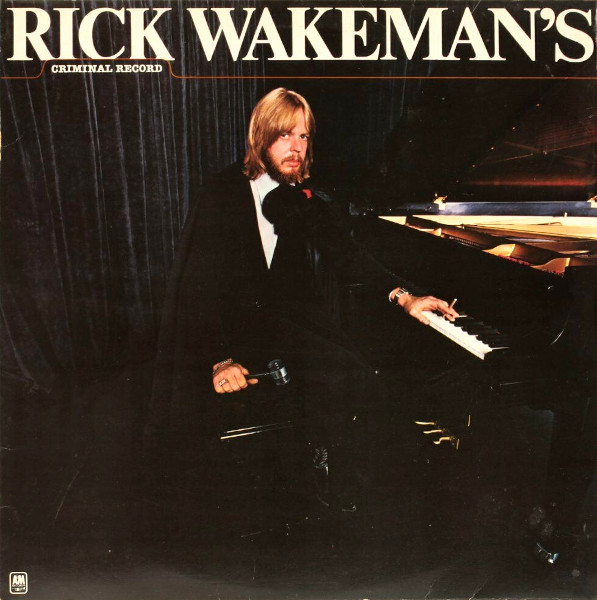 A criminally underappreciated record from the once and future Yes keyboardist featuring crime-themed compositions.

Kronomyth 7.0: The man in the ivory mask.

Last episode I lichen’d this to the “ennervated” arrangements of Going For The One. That’s right; I not only used the word incorrectly, I spelled it wrong. So if you’re still sticking around to read this, you’ve only got yourself to blame.

I keep coming back to this album because of its interesting chambers. The brooding “Judas Iscariot” complete with pipe organ and chorus, has all the heady manner of a major opus (like, say, the opening to The Phantom of the Opera musical, ahem). The furious “Statue of Liberty,” with its mad genius multitracking and complex counterpoint from Chris Squire, has all the earmarks of inspiration. The musical rollercoaster ride, “Chamber of Horrors,” too. Those three tracks, plus the participation of Squire and Alan White, render a favorable verdict for Rick Wakeman’s Criminal Record. (Man, that is so lame.)

Yes fans are bound to take note, but comparing this to a Going For The One or Tormato isn’t helpful. Rick Wakeman indulged his classical fantasies on his own records, something he was reigned in from doing with Yes. True, he trotted out the church organ on “Parallels” and “Awaken,” but he didn’t write those songs. To date, Wakeman’s records provided a consistent, different experience than Yes: quasi-classical interpretations of historical or literary themes, full of fustian steam and despite occasional lapses of judgment (“The Breathalyser”) oftentimes very effective.

Wakeman was merely a member of Yes, but he is the sun, moon and stars of his own works. Fans will probably move in chronological order through his catalog: wives, journey, myths, connection, criminal (lisztomania and white rock are usually asterisked as commissioned works). All five are worth hearing, worth owning, worth admiring if only for their creator’s unwillingness to blanch at his own excess, a true sign of the progressive spirit if ever there was. Fortunately, Wakeman has the chops and the vision to meet his creations midway, providing much entertaining music in the bargain.