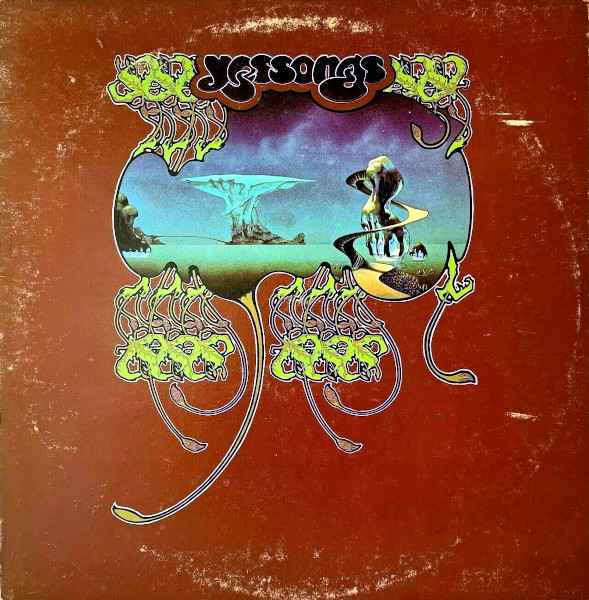 A three-record live set. And, yes, you’ll wish there were more.

Where the hell is “South Side of the Sky?” I’m just kidding. It is literally the only classic song from their last three albums not featured on Yessongs. Otherwise, this is absolutely everything you could want from Yes so far, and as close as you can get to experiencing the band live without buying a ticket.

I’ve seen Yes live several times and can vouch for the fact that the band’s live renditions of these songs really do sound this good on stage. That said, this is the best live version of Close to the Edge that I’ve ever heard. Same goes for Siberian Khatru. You’d think the band would skimp without the studio wizardry to support them, but the real wizardry of Yes lies in their instruments, as this album (or any Yes concert) quickly makes plain.

If you were to plot the peak of Yes (using some kind of prog protractor, I suppose), it may well be here: a triple-record live album that topped the UK charts and appears to have sold over 500,000 copies in the US before it was even released. Yessongs also marks the end of the band’s greatest lineup, as Bill Bruford left during the tour and was replaced by Alan White. (The album’s liner notes cleverly credit Bruford’s appearances as “drums by by Bill Bruford.”) White, for the record, does a terrific job on his debut, which significantly lessens the sting of Bruford’s departure.

Although the live arrangements presented here are about 90 percent faithful to the originals, there are some notable differences. The Fish, for example, is re-imagined as a solo bass showcase for Chris Squire. Perpetual Change is played faster. Steve Howe adds new embellishments on Roundabout. Rick Wakeman serves up some kind of Elton John intro to Yours Is No Disgrace and Howe unleashes an awesome guitar solo in the middle. None of the changes really improve upon the originals, but you didn’t want the band to slavishly follow the albums note by note either, considering that only 60 percent of the band that created The Yes Album remained.

Yes, three albums is a lot. You could say the same about Welcome Back, My Friends, To The Show That Never Ends. But if two hours of live music is too much for you, you have no business buying a live album. I’ve never seen anyone walk out of a concert after 80 minutes complaining about “too many songs.” And you’ll stay seated, spellbound, for two hours of Yessongs and wish for more.

Original double 8-track set
Vol. 1
A1. Opening (Excerpt from “Firebird Suite”)
A2. Siberian Khatru (Part 1)
B1. Siberian Khatru (Part 2)
B2. Your Move/All Good People
B3. Long Distance Runaround (Part 1)
C1. Long Distance Runaround (Part 2)
C2. The Fish (schindleria praimaturus)
D1. Heart of the Sunrise
Vol. 2
A1. Close to the Edge: The Solid Time of Change / Total Mass Retain / I Get Up I Get Down / Seasons of Man
A2. Perpetual Change (Part 1)
B1. Perpetual Change (Part 2)
B2. And You and I: Cord of Life / Eclipse / The Preacher The Teacher / The Apocalypse
C1. Mood for a Day
C2. Excerpt from “The Six Wives of Henry VIII”
C3. Roundabout
C4. Yours Is No Disgrace (Part 1)
D1. Yours Is No Disgrace (Part 2)
D2. Starship Trooper: Life Seeker / Disillusion / Wurm