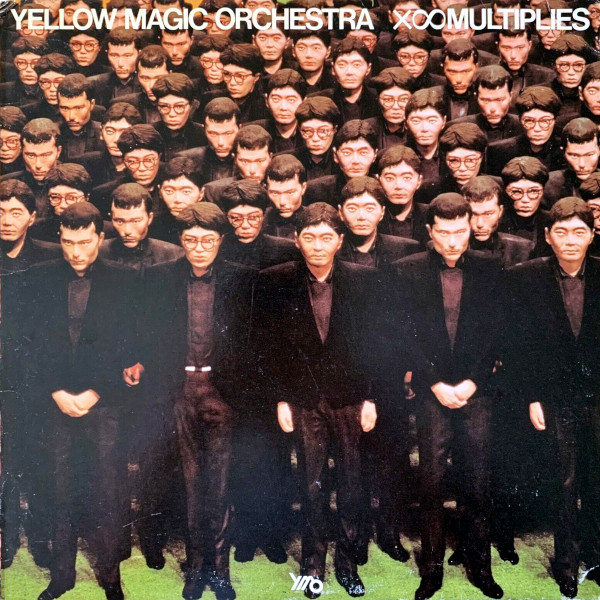 The Japanese got a groundbreaking mix of techno pop and social satire, while the US and Europe got their greatest hits.

X∞Multiplies was released in three very different versions. In Japan, it was a provocative mixture of brilliant new songs and Japanese skits. In the US, it was an extended-play greatest hits record featuring two new songs. And in Europe, it was a strange hybrid of hits, skits and new tracks. Whichever version you owned, it was the best version of Yellow Magic Orchestra yet.

Since the Japanese version is the true original, let’s start there. Whatever you were expecting from YMO’s new album, it probably wasn’t a Wolfman Jack-styled intro, credited here under the odd title of Jingle “Y.M.O.” What follows is a rush of electronic pop music from the not-so-distant future, Nice Age, that combines what for the life of me sounds like Pete Shelley’s “Homosapiens” (which arrived one year later) with a ridiculously catchy chorus. It’s one of the best things they’ve ever done and also one of several new songs common to all three versions of X∞Multiplies. Citizens of Science is another highpoint on the album, this time pointing forward to the music of Thomas Dolby. These two songs are at the cutting edge of electronic dance pop for 1980 and are, in their own way, very revolutionary. The third common denominator among the three versions is Multiplies, which turns Elmer Bernstein’s theme to The Magnificent Seven into a surf-guitar/ska revival with delightful results.

The remaining original tracks include a short treatment The End of Asia, premiered on Public Pressure, and a fantastically funky version of Archie Bell and the Drells’ Tighten Up that you just need to hear. The music is only half of the story, though. The other half is a series of skits sandwiched in between and credited to Snakeman Show, a Japanese performance/comedy group (so far as I can tell) that shared a label and some kind of collaborative connection with YMO. Not understanding Japanese, my general impression of them is similar to Firesign Theatre but with a much darker social edge. At one point, Snakeman Show turns Western insults of the Japanese race against itself, referring to the Japanese as “pigs” and “yellow monkeys” only after it has been established that the Japanese man on the receiving end of these insults doesn’t understand English. Elsewhere, English stereotypes of Japanese accents appear to be accentuated for the purpose of social commentary. In reality, you’re getting half an album each from YMO and Snakeman Show.

In the US, X∞Multiplies excised the skits and added the aforementioned three tracks to a cherrypicked handful of earlier tracks. The result is 30 minutes of yellow magic bliss and the perfect entry point into the world of Yellow Magic Orchestra. In Europe, the label fused half an album of earlier hits with half of the new album. This is the most ungainly of the three versions, at least on paper (I haven’t heard it myself), although someone unfamiliar with the band would be getting a lot of good music in the bargain.

I was impressed with Solid State Survivor as a clever marriage of east and west techno pop (or whatever you want to call it), but the western honeymoon is clearly over on X∞Multiplies. That said, it’s a much bolder musical statement for it, with the power dynamic shifting to YMO while the rest of the western world played catch up.

Composed and arranged by The Yellow Magic Orchestra.