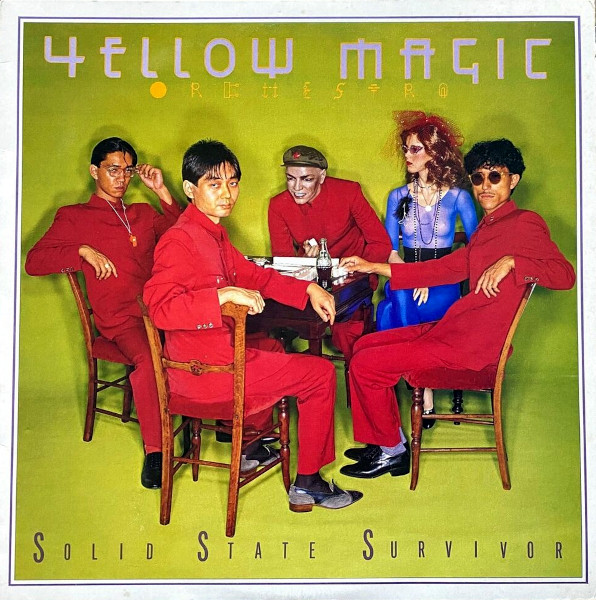 The band steps out of the astrolounge and onto the dancefloor for this Western-sounding, wonderful record.

The first album from Yellow Magic Orchestra featured a lot of blips, beeps and whooshes in its (somewhat misguided) pursuit of 21st century lounge music. On Solid State Survivor, the group shifts to electropop/disco with magical results. Kraftwerk is still the obvious reference point, particularly on the tracks that feature heavily masked English vocals, but now Giorgio Moroder, Ultravox, David Bowie and even a little Devo (presuming it arrived in time) are detected in the mix. The novelty of their first album aside, Solid State Survivor is the band’s true breakthrough.

The album opens with Technopolis, a futuristic disco number that removes the Oriental traces last heard on “Yellow Magic (Tong Poo).” The occasional, robotic interjections (e.g., “Tokyo”) are clearly a nod to Kraftwerk, while Haruomi Hosono adds some funky bass slaps. Absolute Ego Dance returns to the computer game sounds of their first album, then shifts unexpectedly into the album’s most sublime musical moment for an infusion of purely majestic pop. It’s the sort of moment that never arrived on their first album, and the kind of pop music concession that makes their second album so much fun. Rydeen is the first track to use overtly Eastern sounds, this time with a Eurodisco update that provides a foretaste of where Sparks would soon arrive. The first side of music closes with Ryuichi Sakamoto’s take on (the instrumental half of) David Bowie’s Heroes, Castalia. Far from sounding like it was made in Japan, it feels like a product of Ultravox, a mixture of dreaming and dying.

What better case can be made that this is a pop album than that the king of pop himself, Michael Jackson, recorded a version of Behind the Mask? The masked vocals and sweet, synthetic melody might sound like the work of a different orchestra (ELO), but the lyrics have more than blue skies on their mind. The band’s cover of The Beatles’ Day Tripper has gotten a bad rap over the years, in part because of Yukihiro Takahashi’s vocals, but I think it’s a fun ride and who doesn’t like The Beatles? Plus, it’s not like Beatles songs badly sung by a drummer wasn’t the future fate of their catalog anyway. Insomnia sounds a lot like Kraftwerk’s “Robots,” which I consider a compliment to the song and to Kraftwerk. On the closing title track, the band clearly crosses over into new wave terrain. It’s the sort of song you’d expect to encounter on an album by The Vapors: taut, edgy, energized and slightly paranoid.

The band’s first album was an interesting experiment, but the second is applied science with the goal of selling records. It’s the ideal entry point into their catalog and one of the best albums to emerge from the global post-Kraftwerk synthesizer scene. (US audiences were more or less treated to an edited version of the album with X∞Multiplies.) Solid State Survivor has also aged remarkably well over the years. Visionary production from Haruomi Hosono and sophisticated sound choices have retain their fresh impact, which I realize is a type of toothpaste and thus a natural segue to their next album…

Arranged by The Yellow Magic Orchestra.