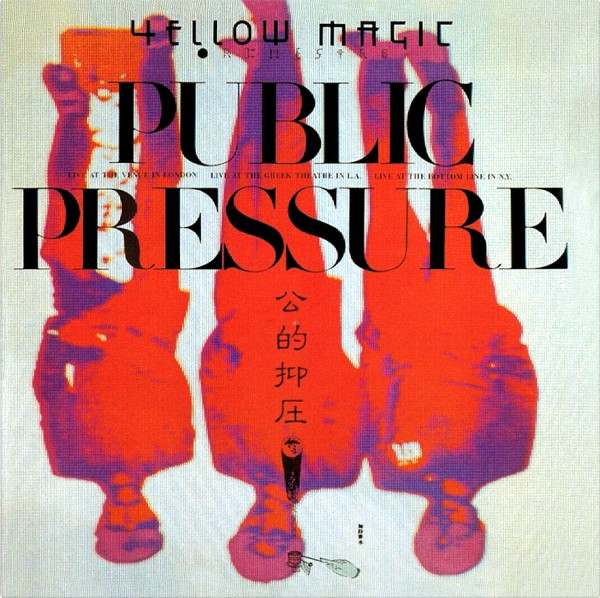 A live album that chronicles the band’s first Transatlantic Tour and features selections from their first two records.

Kronomyth 3.0: Why am over America.

Public Pressure is a collection of performances from the band’s 1979 Transatlantic Tour, featuring shows in London, Los Angeles and New York. The audiences seem enthusiastic, which is impressive considering that Y.M.O. wasn’t exactly a household name, the performances stick close to the originals, the selections are more or less what you would expect from their catalog. No “Computer Games” this time, but there’s still plenty of fun to be had—presuming you thought that their East meets West spacelounge disco music was fun in the first place.

The first side of music was recorded at the now long-defunct Venue in London. Rydeen sets the tone for the album, showcasing the band’s unique “Oriental disco” sound with state-of-the-art (for its time) electronics. A live version of Solid State Survivor is a bit more agitated than I remember, followed by the ultra-smooth Tong Poo. The side ends with a performance of the previously unreleased The End of Asia, which would have felt at home on either of their first two albums. Bonus points for sneaking a snippet of David Bowie’s “TVC 15” (one of my favorite songs of all time) into the fade.

The second side opens with a warm introduction from the emcee at L.A.’s still-standing Greek Theatre before the band goes through a lively performance of Cosmic Surfin’. Despite good sound conditions, it’s the only track from the Greek shows. The last three performances are from NYC’s Bottom Line, like The Venue a smaller club that attracted both big and up-and-coming artists. Yukihiro Takahashi does a lot of singing during this set, including their trippy version of Day Tripper, Radio Junk and La Femme Chinoise. The album closes out, unexpectedly, with the band engaging in some back-and-forth with a Tokyo audience, titled Back in Tokio.

Public Pressure is, frankly, the least essential of the band’s early albums, as it sheds no new light on the band’s artistry other than to prove that the band was cultivating a small but appreciative Western audience. There is nothing here that expands on their original vision or even changes it slightly. This is Y.M.O. with no M.O. other than getting their name and music out to a wider audience. As I’ve said about a bajillion times to the point of irritation, live albums are of more historical than musical consequence to me, so you’d need to be interested in the history of Y.M.O. to be interested in Public Pressure—and interested enough to pay some coin for a pricey Japanese import.